Antifa activists in Los Angeles County can be summed up in one word:  losers.

They are the biggest losers I have ever seen.

Most of them don't look like they have ever showered.

Check out Mr. Left Coast Right Watch (if you can call that a serious name), aka Abner Hauge:

Check out his latest plea for money to harass men, women, and children who want to protect children, stop Antifa hate, and end the senseless street violence in Los Angeles:

Hey LCRW readers/Absolute State listeners,
Bad news.
After a couple of weeks of hell, my car still needs repairs and I've unfortunately got to ask for help again.
LCRW is my sole income and traveling for coverage is a huge part of that.
Anything helps.https://t.co/759FznnRgN pic.twitter.com/qid6hTIKk7

Apparently, he doesn't have a job. He's a bum who contributes nothing worthwhile to Los Angeles, city or county.

His only form of social interaction is a dog, so it seems--and I must say, I feel sorry for that poor pooch! 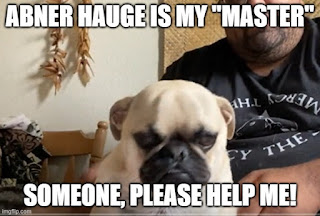 Who are these people? Do they have relevance, any sense of meaning or purpose in their lives?

Oh, I forgot to mention that I live in his head rent free, too:

Arthur Schaper of MassResistance which the SPLC calls "an anti-LGBT hate group," praised the event and is listed as attending. Here's the SPLC on the group: https://t.co/VKDQoHBlU1 pic.twitter.com/kxNkyb6Fuj

Well, Identity Evropa (still going to call them that) as far as I know didn’t hop on the bandwagon for drag queen storyline until now. I feel like it was mostly people in the same crowd as Arthur Schaper

Is that Arthur Schaper. https://t.co/MG91vmpSlT

Arthur Schaper from Mass Resistance hid behind the cops. He called me a pedohpile one time pic.twitter.com/UAgFUeMmC4

What is the matter with these sick people? They are obsessed with me! And LCRW says that I called him a pedophile ... really? Where's the proof? They seem to project their creepy perversions onto other people. It's a very disturbing habit, to put it mildly. Now, back to Soyboy Left Coast, here ... this guy reminds me of all the pro-abortion Karens who rally to kill their own and other people's children. Congressman Matt Gaetz described people like Abner Hauge perfectly at the recent TPUSA SAS conference:

Why is it that the women with the least likelihood of getting pregnant are the ones most            worried about having abortions?" Gaetz said at the Turning Point USA Student Action Summit on Saturday. "Nobody wants to impregnate you if you look like a thumb."

For all of his talks about extremism, too, you should check out his Facebook page:

Not only does he insist on flaunting his gun, not only does he have weird, fascist-like badges on his military fatigues, but he insisted on posting a picture of himself just after he fired off a round and the cartridge was just ejected from the gun.

And this guy calls everyone else "extremist"?

Abner, aka Left Coast should just start with the salad--and then get a job, and then move out of his mother's basement!

Posted by Arthur Christopher Schaper at 10:28 AM