Schaper vs. The City of Huntington Park: Report

On Tuesday, February 22, 2018, I attended a small claims hearing in my action against the city of Huntington Park.

My small claims suit was a result of multiple infringements of my rights, including false arrest, violations of the state's open meeting laws, as well as constitutional violation of my First Amendment rights to petition the government for a redress of grievances.

On June 6th, 2017, the Huntington Park City council unjust ruled me out of order, then ordered my removal from the city council chambers.

The police ordered me to leave, even though they had not given me a lawful order in any way. Other people in the room were disruptive, loud, yelling, shouting. A number of people had shown up to the meeting precisely to harass me and others. It was really shameful what these left-wing Brown Supremacists and their enablers think that they can get away with.

The city council happily obliged with their hate, and the Sergeant at arms and chief of police wrongly accused me of disrupting the meeting.

Fast forward nine months later, and I am in small claims court at Downey Courthouse. I had no idea what to expect, especially because the LA County DA's office has chosen to pursue charges, citing Penal Code 148(a)(1), although it's not clear how exactly a delayed a police order from fulfilling his duty. They had neither duty not right to arrest me that day.

The presiding officer was Commissioner Michael Pearce, an naturalized citizen from England who had served as an attorney in the Long Beach for twenty years. Department SE2 was filled with defendants and plaintiffs. I was really surprised to see so many legal actions sought for this small courtroom.


Fourteen witnesses for my case arrived. I am so happy that so many people were willing to stand u for what is right and testify on my behalf against the corrupt city council and the police who had me falsely arrested. When we all entered the courtroom, some people had to sit in the jury box, since there was no room left in the audience. One group sat on the right side so that they could receive translations of the court proceedings in Spanish or Korean. 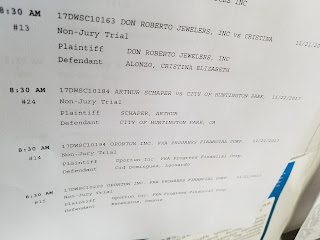 Then I saw Huntington Park Police Chief Cosme Lozano with an attorney. He was going to represent the city of Huntington Park. Really? What were they thinking? The city must be desperately trying to run away from this travesty that they created. They knew that they had no right to arrest me, and they didn't want to see their names dragged through the mud because of their lawless actions. 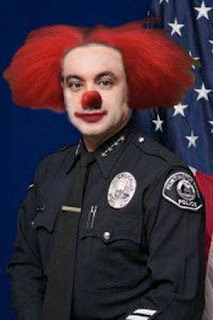 I had to deal with him and his lawyer within five minutes of court opening up for session. The city clerk informed us that we needed to take whatever steps possible to resolve the matter. I informed the attorney that I wanted the following:

1. The city would acknowledge their wrongdoing, that they had no right to call me out of order and remove me from the city council chambers.

2. They would pay the $10,000 indemnity for violating my civil rights and placing me under false arrest.

3. They would remove the two illegal aliens from the city commissions.

With arrogant disdain, Lozano told me that those terms were unacceptable and he would go to court and make the case before the judge. By the way, I discussed this settlement with all 14 of my witnesses surrounding us. I wanted the lawyer and the chief of police to understand that I came prepared to make my case. Lozano and the attorney walked back into the courtroom, but then I told him to come back outside because we must have an exchange of evidence, i.e. discovery.

From that point on, the chief of police understood that I was not going to tolerate his disrespect or allow him to get away with his egregious disregard for the rule of law.

I was really surprised how quickly my case was called up. I was the second plaintiff to  make my case to the judge. He was patient and willing to listen, but had to remind me to mind the time that I was taking, since there were at least 20 other small claims which he needed to hear.

I read from an extended statement which I had printed. I highlight the unjust rulings out of order, my false arrest, the emotional distress of being arrested and incarcerated, and the harassment I had endured from the police department because they had served me multiple notices to appear and never actually filed the criminal package with the DA's office. Moreso, I informed the commissioner that the city has a history of Brown Act violations, and I had provided the letters from the DA's Public Integrity Division on these matters. On June 6th specifically, the Lieutenant lied to the audience, not allowing us to enter the city council chambers at the outset, then lied when he informed us that the seats were at capacity. 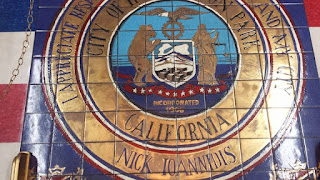 When the commissioner asked if I had witnesses, I signalled to everyone to raise their hands. Pearce said he would lead the trial, and he instructed all of them to sit in the jury box. It was an impressive array of justice against the corrupt city council and the police chief.

One of the witnesses, Gary Gileno, would tell me after the trial that Cosme did not look comfortable at all. He grimaced the entire time that I was presenting my case, including a flash drive with my videos and also another flash drive prepared by Gary Gileno.

Commissioner Pearce then told me to call up the three most pertinent witnesses, and I joked to everyone else: "Sorry everybody. Please don't take offense."

I called up Robin Hvidston, Gary Gileno, and Rudy Cruz.

Each of them testified that they were surprised, shocked that I had been called out of order. They could not believe it. Gary added that because Cosme Lozano was seated at the front of the city council chambers, there was even lesser likelihood that he would have heard anything.

Rudy Cruz testified that there were people behind me harassing me. I stated twice that people behind me were giving me a hard time, yelling at me, and the security on scene did nothing about it. On top of that, I provided statements of declaration from seven witnesses, so that the presiding officer could look them over.

In contrast, Cosme Lozano put forward the government code, then the rules of decorum, then gave the commissioner a CD with different videos on it. His case was rather weak. When the commissioner questioned him about what exactly I had done to merit my being ruled out of order, he tap-danced around the issue, had nothing to say to substantiate it. He often made references to the fact that the meeting was filled with noise and disruption. To which one has to add: why was I targeted and then arrested?

Lozano then let slip that the District Attorney declined to prosecute me for the 403 charge, disrupting a public meeting, because LOTS of people were disrupting the meeting! OOPS!

In this video, I further recap on what happened at the small claims hearing:

More information will be forthcoming. I will be receiving the commissioner's judgment in one to two weeks. 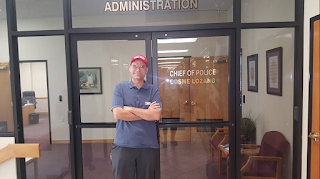 Posted by Arthur Christopher Schaper at 11:03 AM