I can't believe how desperate the left has become, even in the "Balanced" City of Torrance.

We have two regressive leftists on the city council, Kurt Weideman and Tim Goodrich, who are both committed to shutting down the Torrance refinery.

Now we have Jimmy Gow, the previous President of the Torrance Democratic Club, is running for city council.

He still serves as the chairman of the Social Services Commission, even though he and a bunch of left-wing anti-social in-justice warriors trespassed on a veterans hall, spit at veterans, and stole the phone of one veteran.


I confronted about him about his disgusting affront against our veterans:

Apparently, Jimmy Gow doesn't like it when someone reminds him of his trespasses! 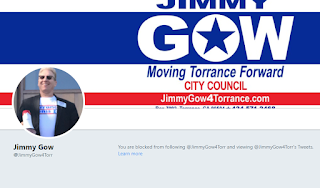