Boo Hoo: Older Illegals Resentful Because "DREAMers" Get All the Attention

My latest article on Townhall.com details how different factions within the pro-illegal, pro-amnesty movement are falling apart.

Here's the article which describes the resentment among older illegal aliens against the "DREAMers", when in reality they are Nightmares to the very end.

Ever since Sam Paredes crossed into the U.S. illegally from Mexico nearly 30 years ago, he followed a simple philosophy of keeping his head down and trying to stay out of trouble.

Too late. He has been in trouble every year that he resided in the United States illegally. Notice how corrupt the left-wing press has become. They can't make any differentiation between truth and error anymore.

The 39-year-old put in long hours for little pay as an office manager at a clothing wholesaler. He paid his taxes and hoped that after many years of waiting, there would come an immigration reform that would grant him a pathway to becoming an American citizen.

He was an illegal alien, which means that his employer got away with paying him a lower wage to begin with. As an illegal, there was no way that he could get back at his employers for short-changing him.

More importantly, though, this illegal alien took a job from an American citizen. That is wrong.

But one glimmer of hope afforded many young immigrants escaped him: Because the New York resident came too long ago, he did not qualify for immigration relief under the Obama-era Deferred Action for Childhood Arrivals program, better known as DACA.

Shame on the press for putting interest and investment into the plight and hardships of illegal aliens. They should be ashamed of themselves. What about American workers? How many Americans have been lost, displaced, or killed because of illegals in our country?

Now he watches as the White House and Congress continue to grapple and negotiate and argue — but at least talk about — the future of the so-called Dreamers.

"I'm very bitter. These DACA kids definitely have this sense of entitlement," Paredes said. "People fought for them and they got DACA and they got their work permit and then they went to sleep, instead of working to fight for the rest of us."

Oh, poor baby! You're bitter? Guess what? Who cares! You have your own self to blame for making your plight go from bad to worse. I have no compassion for this guy. He should not be in this country illegally, and it makes no difference to me how he got here. After 30 years, one would think that he would have taken advantage of the Reagan proposal or otherwise. What is it with these illegals? They have an unbelievable sense of entitlement--and now they are faulting the other groups of illegals over their own sense of entitlement!

What planet do these illegal aliens live in?!

Why is there so much emphasis on the DREAMers?

There are many reasons Dreamers have moved to the center of the debate about illegal immigration. Many say they are here illegally through no fault of their own, brought as children by their parents. Many Dreamers have gone on to college and public service, making them ideal poster children in the debate.

Of course, the real reason why politicians and the press focus on the young illegals is that they induce pity and shame against the American public as well as the political class. "We have to give them amnesty! They know no other country but this one!"

Blah, blah, blah. We owe illegal aliens nothing in this country. It is not our fault that their parents broke the law and brought them into the United States.

But the focus on Dreamers has caused tension between those in the community who can qualify for DACA and those who cannot.

And the fight among the different groups of illegal aliens is getting fierce!

"For months now, everyone has been freaking out. As things have been getting ugly and desperate, the divide between DACA recipients has become more prevalent," Estrada said.

One group wants clean legislation that will provide a pathway to legalize DACA recipients but with no strings attached, such as doing away with the visa lottery. The second group is willing to take whatever they can get as long as they get some sort of immigration relief, Estrada said.

This divide has gotten wider by the minute, and there is nothing that they can do about it. President Trump and Republican Majorities in Congress hold all the cards right now. The Democrats in the US Senate are stick with tilting toward the right because they are worried about re-election, or tilting to the far left because they want to run for President and/or appease the ravaging left-wing base.

Now the illegals and their enablers are going crazy!

"I truly believe that desperation has led some of us to the degree, I'm hoping, of temporary insanity. They see no other option They see no other door," she said. "It's very disheartening and sad. We're supposed to be a united community and we obviously are not."

Who gives a rat's butt how these illegal aliens feel? I don't care about their sense of resentment, frustration, or entitlement. They should have never entered the country in the first place. This is how desperate the illegal alien, pro-amnesty movement has become. They are more invested in putting their own feelings ahead of right and wrong.

I still can't understand how it is possible for someone to have entered this country at nine years old some 30 years ago and still not have any kind of legal status. President Reagan signed off on the Simpson-Mizzoll compromise in 1987. Surely, the man featured in this article who is not DACA eligible would have qualified under that program, right?

And yet ... he didn't. Chief of Staff John Kelly never claimed that non-DACA illegals are lazy, but it sure looks as though many of these illegals refused to take advantage of the pathways to citizenship already embedded in our federal statutes.

Oh, and check out where one of the old illegal's allegiances truly lie: 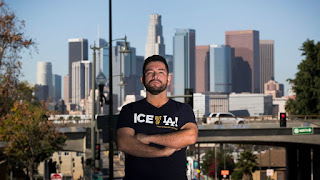 His shirt says "ICE out of LA!"

How much more obvious can these anti-American bigots make it? They are politicized radicals with neither respect nor honor nor love for this country. They don't see themselves as needing to assimilate to the United States. In fact, they don't think that they should have to ask for permission to stay in the United States at all!

What an irony, that one group of illegals calls the younger set of illegals "entitled", when all of them are exposing their sense of self-serving arrogance.