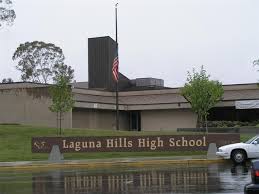 Laguna Hills High teachers are indoctrinating students with a bunch of hollow, left-wing talking points. One assignment instructed students to talk about "white privilege," for example (more details will be forthcoming).

They are also teaching anti-Trump nonsense not just in the English classes, but even in the Spanish classes!

What is the matter with public education in the state of California. In poorer districts, kids don't have enough supplies or even safety. In rich schools, nothing but social justice warrior hate is the rule of the day.

Here's what she shared with me over the last two weeks:

Hi Arthur my daughter is trying to get copies of the worksheets she did for the class but she had to turn them all in. She just called me and told me teachers at her school are getting suspended for hitting a trump piñata in the office!  Also that women’s march is trying to get all the kids to walk out of her school in march for that movement. They started an Instagram page for her school and my daughter and all her conservative friends were arguing with the lib students about gun right etc and they had to turn off the comments off so I don’t think they are going to get much support.

Here's a recap of the statement:

My daughter said the piñata was actually in a Spanish class!  They were having a Spanish party and got a trump piñata and we’re hitting it with the students and got suspended!  Unbelievable

I contacted the principal's office at Laguna Hills High School. The secretary informed me that the event was not authorized by administration, and by the time they found out about it, the event was over.

Then I found out that the Women's March activists have been targeting Laguna Hills High School among the hundreds of thousands across the country:

This is outrageous behavior, and it cannot be condoned.

Let him know where you stand on these issues, and demand that they stop the teachers from indoctrinating students with left-wing talking points which have no basis in reality.

Posted by Arthur Christopher Schaper at 11:39 AM