I had to share my thoughts on this segment on CBS' "Sunday Morning".

Was Andrew Johnson one of the worst Presidents in our nation's history? Not at all. He was a Democrat who supported the union but was not a fervent abolitionist. He was also a drunk and appeared in public inebriated.

He vetoed legislation which would protect the natural rights of freed slaves. He also removed the 40 acres and a mule accorded to black slaves once set free. 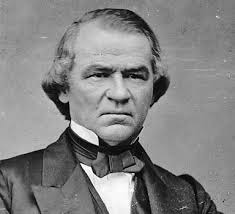 Johnson was a Democrat, but the Republican supermajorities in Congress overrode every one of those vetoes. They then tried to remove him from office because of his violation of the Tenure of Office Act, a piece of legislation which turned out to be legislative overreach into the powers and prerogatives of the executive branch. The law basically required that the President needed the approval of Congress to remove members of his cabinet. Such a law was unconstitutional, and Johnson disregarded it, then the Congress tried to remove him from office through impeachment and then trial in the US Senate.

It's hard to believe, but after the Civil War legislative supremacy was a growing concern, and Johnson stood against the abuse and diminution of the executive branch's power and authorities.

Still, nothing justifies his racist views against black freedmen, and many liberals need to understand that Lincoln brought a Union Democrat onto his 1864 ticket because he needed to win re-election to ensure that he could finish the war and ensure the end of slavery. Also, Lincoln needed to a fusion ticket to bring in wayward Republicans and Democrats who would fight to preserve the union, which would furnish and complete the fight to end slavery.
Posted by Arthur Christopher Schaper at 12:32 PM