Eric Holder's corrupt non-partisan redistricting efforts are now going after Wisconsin. Holders wanted to brainwashing young people to hate guns, so that progressive leftists like him could take guns away and abolish the Second Amendment.

As Attorney General, he was running firearms to Mexican drug cartels through Operation Fast and Furious, which led to the murder of Americans, including border patrol agents. Shame on Holder.

The corruption and malfeasance of Holder's Department of (In)justice is unseemly and unprecedented. Congress held him in contempt for his rampant disregard for the rule of law, even as he refused to prosecute serious gun crimes then politicize the DOJ for President Obama's narrow, corrupt ends. 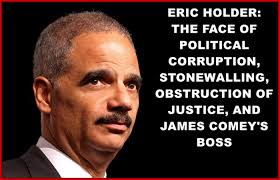 Now he's moving across the country to undermine Republican political power in state legislatures. His "reforms" to end partisan redistricting are just another naked power grab from the left to undermine the confidence and consequences of local and statewide elections.

Wisconsin is another battleground in which Democrats are hoping to resurge and take back power at the state and then national levels. We must stand our ground against this alien, communistic onslaught against our country.

Posted by Arthur Christopher Schaper at 10:05 AM