Here's a great op-ed which featured the efforts of MassResistance to push back and stop the Drag Queen Story Hour program in Chula Vista, CA.
This was a pretty decent op-ed, actually. It's about time that more mainstream media reporters paid attenton to the great work that MassResistance is doing to stop this madness.
Drag Queen Story Hour: glittery entertainment or gender-bendingprovocation?
By PETER ROWE -- SEP 15, 2019 | 8:01 AM

"They are going after the kids in their formative years with a very aggressive agenda or ideology aimed at 3- to 8-year-olds," said Villafranca, a South Bay real estate agent. "It is basically the normalizing of that whole LGBT drag queen pedophilia lifestyle. This is brainwashing."

"It's children's entertainment," said Faderman, curator of the San Diego History Center's recent exhibit on the area's LGBTQ legacy. "I don't think drag queens are trying to convert children to a way of life. Kids respond to its color and its charm and its funniness, and they are entertained."

For years, drag queens have read picture books to young audiences in public libraries. These sessions often prompt protests like the dueling rallies seen outside Chula Vista public library's Civic Center branch last Tuesday. Separated by barriers patrolled by police, the two camps confronted each other with signs and slogans for hours.

"These are adult entertainers," said Schaper, a Torrance resident and organizer of the self-described "pro-family activist group." "It's not hateful to protect children. They have to stop pushing this agenda, this false LGBT agenda, stop pushing this on the youngest, most vulnerable members of our community."
They got everything that I said spot on. I was really grateful for this coverage. 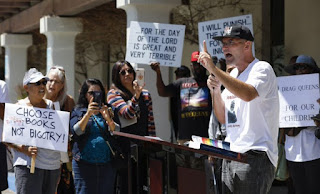 Supporters counter that these programs are tailored to youngsters. There's nothing sexual about the readings or readers, even if the latter are decked out in flamboyant gowns and layers of glitter and mascara.
The gaslighting is unprecedented. We are talking about drag queens, sexually explicit entertainers, reading to children. There is nothing about any of this that is properly tailored for youngsters. Nothing at all.

When the library scheduled this presentation months ago, City Librarian Joy Whatley anticipated some opposition. Still, she was unprepared for the volume of calls, emails, picketers.
She should have known better, and the city of Chula Vista learned the hard way that the community did not want such filth in their city.

"I'm slightly overwhelmed," she said. "We didn't expect this to be such a huge thing."

Still, she had no regrets: "We're diverse, we're inclusive, we welcome all."
Sex offenders are welcome around children, too?

But was this the right venue for Barbie Q and Raquelita, last week's readers? John Renison Jr., an aspiring Republican politician from the South Bay, started a change.org petition calling for the library to cancel the event. His text professed support for the LGBTQ community and "equal rights for all citizens but this is something else. There's a fine line that's being crossed!
This approach is all wrong. There is no such thing as an "LGBT community", and we should stop treating sexual perversions and natural and innate behaviors. Enough is enough!

"There is no reason to indoctrinate our children with these ideals."

By the time the show started, 10 days after posting the petition, Renison had 611 signatures.

While drag queen storytime is a recent phenomenon, male actors have performed as women for centuries. From ancient Greece through Elizabethan England, plays' female roles were traditionally played by men. In one form or another, that custom endured almost into the present.
Men playing female characters is something completely different from drag entertainment. It is comparing apples to rotten oranges.

"In vaudeville, in the late 19th and early 20th centuries, this was very common," said Faderman, author "The Gay Revolution: The Story of the Struggle," a 2015 history. "This was considered family entertainment."

Julian Eltinge, a popular vaudeville female impersonator, later starred in silent films. In his alter ego, the lovely and innocent "Vesta Tilley," he became one of the era's highest paid actors. With his earnings, he built a palatial Hollywood mansion, Villa Capistrano, and bought a ranch in Alpine.

"Some of the highest paid drag queens in the past have identified as heterosexual," Faderman said. "It has nothing to do with sexual behavior. It has everything to do with entertainment."
But the whole Drag Queen Story Hour program is about normalizing sexual perversion like homosexuality. The book that the two drag queens read, "Julian is a Mermaid", has a picture of boy stripping down and putting on makeup. That is subtle pedophilia, to put it mildly.

While drag entertainers were widely accepted in their professional roles, authorities frowned on cross-dressing when it occurred off stage. From the mid-19th century until the close of the 20th century, many U.S. cities forbade people from — to quote an 1848 Columbus, Ohio, statute — publicly wearing "a dress not belonging to his or her sex." San Diego's ban was on the books until 1998.
That ban should be restored!

Starting in the 1930s, though, nightclubs with floor shows featuring men in drag opened in New York, San Francisco and other cities. San Diego's Show Biz Supper Club began its 14-year run in 1968, while a successor, North Park's Lips, is celebrating its 20th anniversary.

Today, the acts are a bit more risque than they were in the days of chaste Vesta Tilley.
There you go! "Risque" is the word. There is no way that anyone can claim that that kind of trash has any right or reason being around children!

What a crock! No one bought into it.
"In spaces like this, kids are able to see people who defy rigid gender restrictions and imagine a world where people can present as they wish, where dress up is real."

"The response has been overwhelmingly positive," said Alexandra Ott, the local chapter's organizer. "Every time the kids are thrilled to be in an environment where someone is reading to them, and being with other kids."

In contrast to the Chula Vista event, there were no protesters. Ott credits this to the fact that the shows were not widely advertised.

Ott selected the drag queens from a list of local performers who had already undergone background checks. This is a sensitive subject — earlier this year in Texas, Mass Resistance reported that at least two Drag Queen Story Hour performers were registered sex offenders.

"That made international news," Schaper said.

In Chula Vista, the performers did not undergo a law enforcement background check. But like all volunteers coming to the library for fewer than 24 hours, they were subject to a level of scrutiny.
Well, well, well. And the mayor and city council in Chula Vista claimed unequivocally that the drag queens had received background checks. What fresh hell is this?

"We check their professional affiliations," City Librarian Whatley said, "check references, talk to other librarians who may have worked with them."

Whatley and her team also met with the Chula Vista Police Department. "Just to have a safe family event," she said, "that's what we are looking at."

While physical violence has never marred a Draq Queen Story Hour event, these sessions can be emotionally bruising. In January, the Putnam County, Tenn., library's meeting room was rented by the local Story Hour chapter. On the scheduled day, entering the library meant passing a boisterous scrum of protesters and counter-protesters.

"Children were in tears," said Phil Schaller, the library director.
The parents who brought the children to the program should have been in a jail cell.

In Leander, Tex., an Austin suburb, the city council last month voted to stop renting meeting rooms in the public library to any group. Among those whose planned event was scotched: Drag Queen Story Hour. City officials insisted the step was taken for financial, rather than ideological reasons, reporting that this year's rental fees had amounted to $1,800, while security had cost $20,000.
MassResistance was instrumental in stopping that program there, too.
Rival Camps
In Chula Vista, rival spiritual camps formed on either side of the Story Time issue. More than 70 religious figures — from Methodist and Lutheran ministers to Catholic priests and a Jewish rabbi — signed an open letter praising the library's decision.
Those "religious figures" are not religious. They are apostate.

"It is clear that the opposition to this event is rooted in homophobia, bigotry, xenophobia, and discrimination," the letter said. "As faith leaders and people of faith, we believe that discrimination of any kind is an affront to the core values of our faith, and strongly oppose the use of faith as a weapon to threaten the future of events such as Drag Queen Story Hours."
Instead of trying to defend the perverse notion that it was OK to have sex offenders or sexually explicit entertainers around children, they decide to hate the parents, the grandparents, the pastors, and other community leaders who opposed the program. What a shameful display of hate!

Several Pentecostal churches staked out the opposite position. At a Sept. 4 rally on the steps of City Hall, Pastor Art Hodges of the South Bay Pentecostal Church said he didn't object to parents taking their children to a drag queen event. He objected to Story Time's site: a taxpayer-funded library.

"They're the parents, we're not protesting their right," Hodges told News10. "But they should do that privately, on their own time, in their own place, on their own dollar."

(Days later, South Bay Pentecostal was vandalized, with the words "Lucifer" and "Satan" painted on the exterior. At press time, police had no suspects.)
So much for "Love is Love" and "Love Trumps Hate", right?

Sister Donatella Soul, a self-described "drag nun," countered that Drag Queen Storytime needed to be held in a city facility. "It's important, especially in civic spaces, for people in different communities to have access," she said.

Chula Vista has also been involved with the local LGBTQ community, hosting a panel discussion of staffers from the San Diego Lambda Archives and screening a "Pride Film" series.

Patrons, Whatley said, should be able to find a wide range of materials at the library. In fact, Drag Queen Story Time was just one offering in a large catalog of summer events promoting literacy: Spanish Storytime, Toddler Storytime, Dog Days of Summer Storytime...

"And like any book or program we have," Whatley said, "you have to opt in."

Or opt out. Schaper, the MassResistance organizer, said Chula Vista's Drag Queen Storytime has been a powerful recruiting tool.

"It's grown considerably now, especially in the last month," he said. "The idea that drag queens are in the libraries is just so horrific to them."
Yes, it has! MassResistance gained considerable attention and support for our efforts to stop the Drag Queen Story Hour madness in Chula Vista. We still have members of our San Diego MassResistance chapter who are ready to step in and do what needs to be done to stop this LGBT infiltration into the public square. The men and women from many church communities reached out to us and worked with us to alert the public and raise outrage about the program. Event after the event transpired on September 10, 2019, the San Diego MassResistance team continued to hammer the city council for allowing that disgusting program to take place at the main library.
They did a great job, and then the pandemic hit. Notwithstanding the problems which ensued, our MassResistance activists around the country and the world have worked with us, and we never stopped our push to stop the LGBT agenda and its militant miscreants.

Posted by Arthur Christopher Schaper at 10:59 AM