CPAC Caved to Anti-Liberty LGBT, and Now They're Crashing

The Conservative Political Action Committee has been caving to the destructive bigoted, anti-family LGBT Agenda for a long time, according to Bryan Fisher.

I had no idea how bad this perversity had become in this once conservative movement, but here we are.

The CPAC movement has lost its way, convinced that they have to go "libertarian" to reach out to Millennials and young conservatives. There is no liberty in the destruction of the family.

This is utter nonsense. Conservatism depends on a clear Judeo-Christian ethic. There can be no culture without the Gospel, which in turn leads to the proper treatment of women and children. The dignity of man is upheld, in spite of his greatest faults and failures.

Our rights come from God. Natural rights and natural law turn unnatural chaos among fallen man into peace and civility. It cannot be any other way.

Commerce was once disdained, the notion that men and women could engage in trade rather than theft and betrayal to become wealthy. All of that is gone today, in large part because God blesses men and women with His grace and favor.

Last of all, the very bulwarks of our civil society begin with the family. It takes a family to lead babies to become adults and engage in trade and prosperity in the world. The basic elements of the free markets and free enterprise--respect, trust, honest engagement, fair discourse--these values do not emerge out of a vacuum.

It takes a family, a Mom and Dad. Not two Moms or Dads. The emotional well-being of children is essential a prosperous, stable society. Homosexuality and transgenderism are undermining all of these necessary verities. It's time to fight back.

The LGBT Movement has already overtaken the Democratic Party, and now they are inching their way into the conservative movement, trying to establish themselves as somehow libertarian. The fact is that the more we defy Judeo-Christian principles and undermine family, the more government that will be needed to corral a society of men and women with basic direction or principles in life.

In other words, it takes a family, not a village, not a government, not a movement of social justice warriors.

But it's getting worse. They just banned Jim Hoft, the editor for Gateway Pundit, who was slated to speak on a Free Speech panel. When Pamela Geller found out that this featured guest was not permitted to attend, she shut down her free speech panel and cancelled her engagement at CPAC, too!

The panel was announced on Tuesday by Breitbart News. It was not officially organized by CPAC or the host organization, the American Conservative Union. It was sponsored by the American Principles Project (APP) in coordination with CPAC, and was to be held as a breakout session at the conference Friday afternoon.

Geller said that she had been asked to exclude Hoft after a post at Gateway Pundit on the Parkland shooting in Florida last week. The site has published several posts criticizing the students who are advocating for gun control.

The demand, she said, forced her to cancel the panel.

This wasn't the first story reported about CPAC, however, shutting down speakers and presenters. Dr. Susan Berry reported on Dan Schneider's reneging on his approval for MassResistance to have a table at the event:

MassResistance, a pro-family organization that supports combating the radical LGBT agenda in schools, says it has been banned from the exhibit hall at the Conservative Political Action Conference (CPAC) to be held next week.

According to MassResistance, which is based in Massachusetts but is active nationwide and internationally, its application to exhibit at CPAC was originally accepted on January 29 after the vetting process. 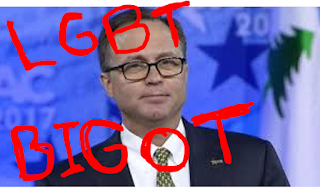 Cowardly Political Action Committee is crashing and burning, and that's what should have happened. It's time to ditch this hollow conference which has no value, substance, or even the faint appearance of caring about conservative values.

Call CPAC right now, through their ACU parent sponsors, and tell them "You're Fired!"

Call Patrick Plein, one of the policy analyists for CPAC, and tell him that CPAC is done!