Congressman Richard Hudson has been fighting hard to protect the rights of all American citizens. His bill, H.R. 38, would ensure that all state jurisdictions would honor concealed-carry permits issued in one state.

If a gun owner obtained a permit in Massachusetts, other states and their law enforcement officials would have to recognize those permits. This legislation is essential because of what happened to a single mother from South Philadelphia. 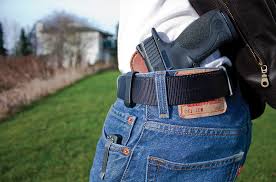 She was mugged twice, and decided to do something about it: she purchased a firearm with a concealed-carry weapons permit. She drove to New Jersey, and a traffic cop pulled her over. She informed the officer that she had a firearm in her pistol.

Because New Jersey does not recognized CCWs from Pennsylvania, the mother was arrested and jailed for 50 days. This is America, not some third-world dictatorship. New Jersey Governor Chris Christie intervened and pardoned her, but the problem remains.

Any law-abiding citizen who has obtained a permit should be free to carry in any state. We need national reciprocity to enforce the full faith and credit clause in Articl IV,  Section 1 of the United States Constitution. There is no excuse for that woman or anyone else to end up in that mess.

H.R. 38 has passed the House of Representatives. Senate Majority Leader Mitch McConnell is sitting on this bill, refuses to bring it up for a floor vote. That needs to change.
Posted by Arthur Christopher Schaper at 12:46 PM