Resist La Raza Radicals, and They Will Flee

I just got off the phone with a fellow conservative activist from Texas.

Even in the deep red Lone Star state, secure border advocates can feel lonely. The state legislature had two stunning opportunities to secure the border and strip sanctuary cities (for illegals, not citizens) of their funding, but the legislation went nowhere. 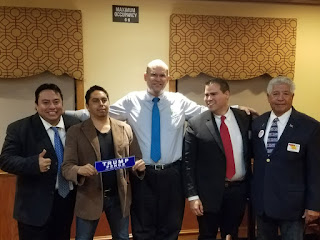 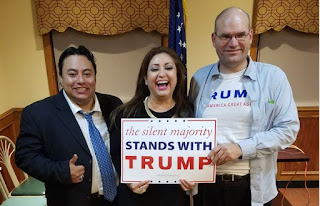 The same hesitation had erupted in Wisconsin last year, when the state senate flirted with a bill to punish detestable sanctuary cities. Governor Scott Walker, who had beaten down Big Labor in his own backyard, would not advocate for the bill.

Of course, in California, illegal immigration is welcomed with open arms and taxpayer dollars. The state legislature wanted to open up a “New Americans” office for the illegal alien hordes streaming in. A few Republicans in league with the Democratic majority of even expanded health insurance to illegal aliens.

The same holds true for other states, like Delaware, Illinois, and Washington State, where public benefits flow into illegals' pockets from our own. 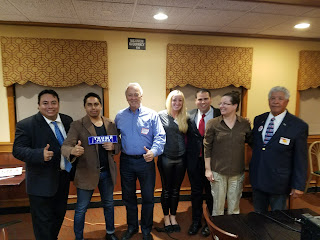 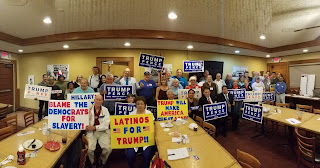 Why have Republicans caved or fled from this fight? What gives? Why has it become so difficult to stand up to illegal immigration and stop open borders?

Some sources credit the Big Business donor class that craves cheap labor as well as corporate welfare. Granted, that is a generous and accurate answer. I will also submit, however, that the political correctness silencing average Americans has infiltrated upwards.

There is some good news in the midst of the bad, though. 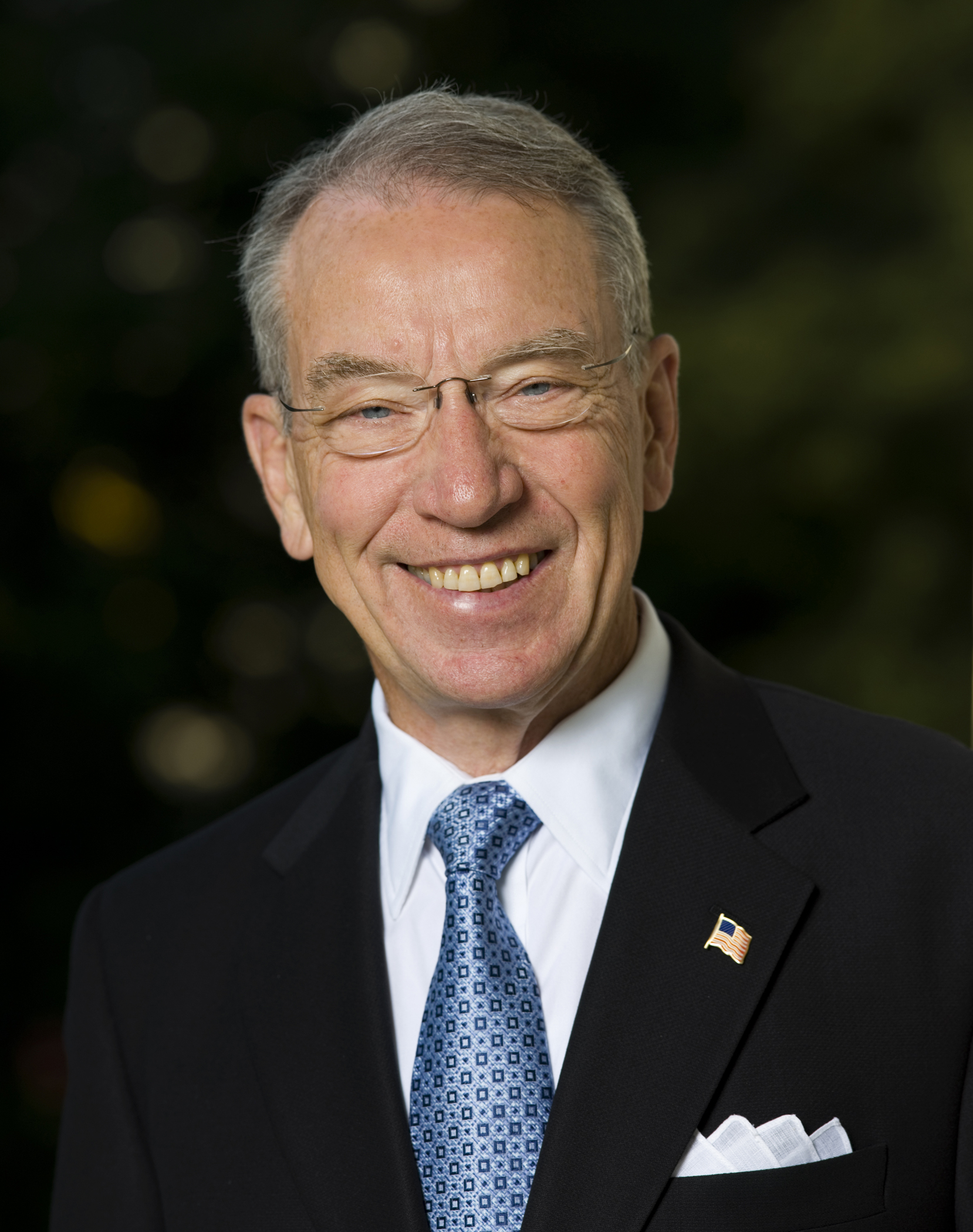 US Senators like Charles Grassley of Iowa along with Ron Johnson of Wisconsin have not been afraid to stand up to illegal immigration, particularly its disastrously negative consequences on ours citizens and communities. Pat Toomey of Pennsylvania has been pushing legislation to end federal funding to sanctuary cities, too, and overtly resisted taking in refugees of dubious status into our country.

To recap: On June 13th, 2016, five American citizens were burned alive in an abandoned warehouse in the Westlake section of Los Angeles.  Grassley took immediate action to investigate this perverse tragedy, in part because four of the victims were from Iowa. The one Angeleno, DeAndre “JokerFace” Mitchell, ran into the fire to try and save them. While the Americans all died, illegal alien Johnny Josue Sanchez of Honduras survived. He awaits the death penalty if convicted. These unconscionable losses of life cannot continue, and the cowardice to avoid doing something about it cannot go unchallenged.

I came face-to-face with the horrid consequences of illegal immigration when I visited that abandoned warehouse in June. I still remember the smell of charred rubble and the inexplicable sorrow of DeAndre Mitchell’s wife. Later, I would confront the vicious nature of the hatemongers pushing this officious, evil policy of open orders and unfettered migration on two more occasions. La Raza affiliates (most likely funded by socialist billionaire George Soros) paraded in front of the Adelanto Detention Center demanding its closure.

Then these protesters assaulted a private meeting of Republicans with Sheriff Joe Arpaio.
Instead of being intimidated by their abuse, I exposed their hatred, first at my local city council meeting, and then with news sources throughout the Los Angeles region. These La Raza haters understand “Rules for Radicals”, how shame is extremely powerful, and the fear of a threat is actually greater than the threat itself. But I’ve read their book, as have fellow conservative activists of our team We the People Rising, and we are standing our ground.

October 20th, 2016, the Beach Cities Republicans would welcome Latinos Por Trump founder Marco Gutierrez, along with three other prominent Pro-Trump Latinos. Within days, another Facebook Event page signaled that La Raza would swarm the area and “Shut Down” our event.

Instead of canceling the meeting or moving to a secret location, our team contacted the Torrance Police and worked with the restaurant owner to ensure full safety and protection. For some Republican leaders in my area, though, that was not enough. One of the local Republican leaders implored me to cancel the meeting. “The very meeting itself is the problem.” I refused.

I finally realized another reason why so many conservatives don’t take a firm stance: absolute panic. Fear for the worst. Such internal terror cannot be reasoned with. Conservatives must stop running because they fear the potential consequences of bad men doing bad things. Edmund Burke’s ominous warning lives on and leaves a telling caution: “For evil men to protest, good men must do nothing.”
I refuse to do nothing, and more of us are standing up and doing the same.

La Raza invited 800 people to disrupt the meeting. Only 26 responded to the call to protest.
How many actually showed up? ONE! 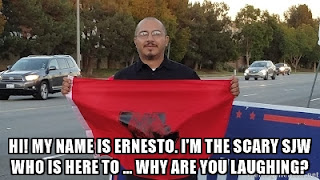 You can see his picture at the top, but also noticed a Trump sign right behind him. Another pro-Trump demonstrator showed up and took the limelight away from the La Raza activist (his name is Ernesto Ayala. Why not tell him how ineffective he was? Visit his Facebook page here)
The Beach Cities Republicans meeting went off without a hitch.

Omar Navarro, who is running against Congresswoman Maxine Waters (D-Torrance) started the event. Then Francisco Rivera of Huntington Park, followed by Raul Rodriguez, the California coordinator for America First Latinos.

Then came Marco Gutierrez, who stirred some controversy with his “Taco Trucks on Every Corner.” Truly, though, a culture where the rule of law is abandoned, where private businesses cannot profit because of corruption and regulatory burdens will resort to a street-ware cash only economy, one where few thrive and many barely survive. His personal story as well as political vision inspired many.

The most stirring outcome from this, though, was the vindication of knowing that our team refused to be bullied. We celebrate our candidate, and we exercise our freedoms.

As for La Raza, they could only muster one lonely SJW … Boo Hoo!

Lesson learned: resist the La Raza bullies, and they will flee!
Posted by Arthur Christopher Schaper at 7:04 PM