As I had written in a previous post, I landed in Houston at 2am on Friday, October 28th.

I had enough time to get some rest.

Thankfully, the conference did not start until the late afternoon. 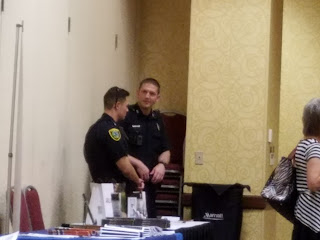 Yes, we had police present at the conference.

A few radical LGBT groups were manifesting to protest.

At the hotel, though, there was little to no disturbance at all.

Sadly, the meeting was not the most well-attended.

According to one source, a mega church had offered resources, time and even confirmed a large turnout to attend. But the church backed out at the last minute.

In spite of the less than expected turnout, it was a really eye-opening conference.

The need for the Gospel to be preached in our schools and in our society could not be more emphatic.

It is NOT about trying gay men to give up their lifestyle.

Homosexual feelings are a manifestation of deeper pain, especially for men who do not want to feel that way.

Dr. David Pickup could not have made it clearer: his practice is all about restoring peace to his clients.

And the same-sex attractions fall away.

It;s about helping men who have endured unspeakable trauma as children, violent attacks to their identity. Many of his clients had no contact, felt no affection from their fathers. In many cases, they did not know their fathers at all!


For Dr. Pickup, this work is particularly personal, because he was molested as a kid, and struggled with his sexual identity as a result.

The wholeness he presented to the audience was particularly inspiring.

We need to fight against the LGBT agenda because in far too many cases, the reason why men and women struggle with same-sex attraction has nothing to do with sex.

It has everything to do with the three things that everyone needs:

Indeed, many of us take these elements of our formative years ... for granted.

But with a world which has diminished fatherhood and shamed manhood, should we be surprised by the growing number of "gay men"?

He also identified why young people who grow up thinking that they are "born that way", because they lack the formative needs before they realize that they are not receiving them.

Here are some of his comments at the Stand4Truth Conference:

Here he outlines clearly what reparative therapy is NOT!

It's not about making people feel ashamed of themselves.

It is not based on aversion techniques.

It's about truth. Knowing the truth about your innate value before God.

It's about scientific evidence.

It's about standing for what is right and standing up to the lies.

When he shared with the audience that he was a victim of abuse, it really shocked and wakened everyone up at the same time.