La Raza Racism on Full Display: Stand Up to Their Anti-Trump, Anti-Truth Hate!

The racist "pro-immigration" aka pro-open borders lobby La Raza attacks anyone who resists or rejects the destruction of national sovereignty or criticizes the overtly hostile Chicano ideology of "Take Back Alta California."

The ethnic studies courses have poisoned young people's minds, teaching them to see themselves as Brown victims in a White world.

And yet freedom is for everyone. It's not limited to skin color. Even if people discriminate against you because of skin color, they cannot keep a good person down.

So, La Raza and its hatred of the rule of law, the American Government, the American system of individual right and national identity is flawed and false,

One of their most embittered chants against opponents is "You're racist."

Here are some snapshots of their disruptive behavior at the Veterans Hall in West Carson: 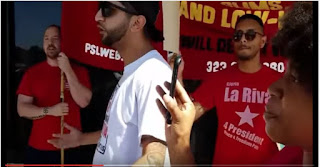 Notice the "La Riva" shirtof the activist right in the middle. 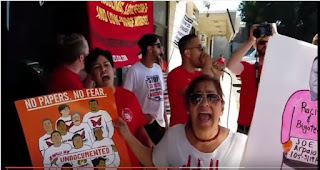 Here, the racist activists insisted on blaring loudly through a microphone to disrupt our event. Other shops are lined up next to the Veterans Hall. I wonder how many of them lost business that day because of these criminal deviants.

Now, back to the race card.

It has pretty much lost its nerve or power in the mouths of these hate-mongers. They are the ones demonstrating racism and hatred. They show intolerance for different points of view. They would not allow the South Bay Impact Republicans to conduct their meeting in peace.

They also stole a man's phone, pushed members of the group, spat at passersby.

And then this famous shot, showing their complete disdain for authority: 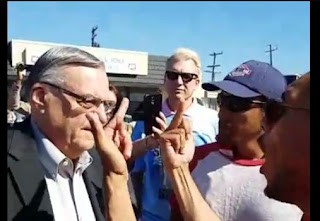 Let's not forget the virulent hatred of this crazy woman:

Then she called this black woman a "House Nigger": 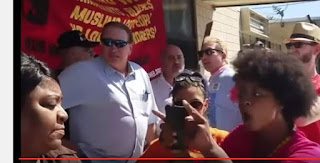 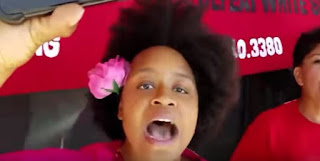 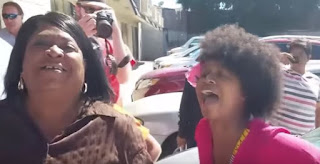 It's pretty evident who the real racists are--and let's not forget who was in the middle of his hate fest: 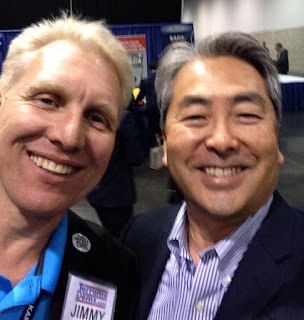 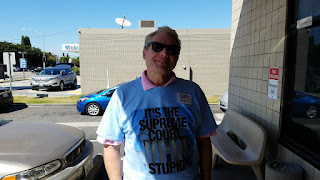 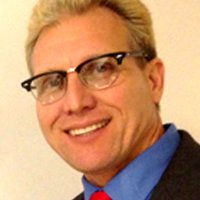 He joined this protest. He supported and defended their actions. He promoted the protest on his Facebook page.

He did nothing to stop this rampant hatred and destruction.

And it does not end there:

Check out this link that is posted on the Torrance Democratic Club:

Here is the picture of the hateful mock-flyer:

Is this not the most offensive thing yet to come from the hands of La Raza activists?

This was posted by Ernesto Ayala, who in turn posted it on the Torrance Democratic Club Facebook page. 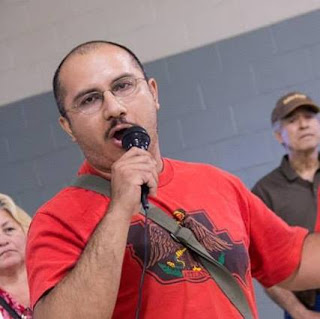 Why are there pictures of rats or mice at the bottom of the page? Does Ayala associated Mexicans or Americans of Mexican descent with stereotypes?

Now, for the record, here is the flyer which the Beach Cities Republicans have distributed far and wide:

Notice that four men of Hispanic descent are featured, including a young man named Bertran Usher, who was shut out of speaking with an elected official in the Los Angeles area two months ago: 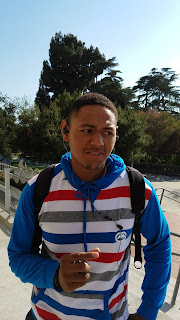 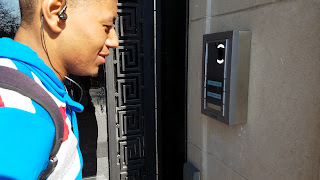 So, the truth is ... La Raza activists like Ernesto Ayala and Jose Perez (see the link here) are the racists, attacking men and women of color for their political views.

Since when did individuals of Hispanic, African, Asian, or other ethnic status have to vote and think a certain way? Isn't that tyranny? Isn't that racism?

Check out the Event Page which Ayala created, too:

It's crystal clear that La Raza activists do not respect the rights of others.

Particularly of "their people".

There's more to the Event Page which disappoints: 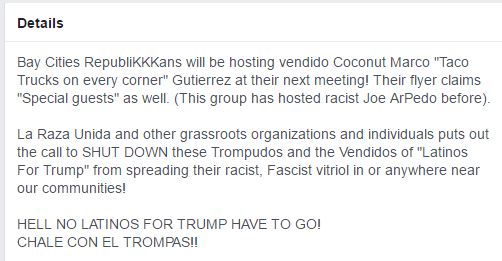 There is so much wrong with this text, that one has to wonder why anyone takes these rabid anti-fact activists seriously.

They called a Mexican American a "coconut," which is racist rhetoric in itself.

They want to "SHUT DOWN" the Trumpudos (a combination of Trump and a curse word in Spanish).

This is just shameful and sad.

Hispanic activists are demonstrating racist, hateful attitudes to other Hispanics. Is there any shame left among the rabid Left?

This is La Raza self-hatred. What else can one call it?