Donald Trump-mentum is steam-rolling Hillary Clinton across the country.

I didn't know what to expect after the Republican National Convention. Yes, the polling during the RNC Media bump placed Pennsylvania ever so slightly in the Trump column, and FiveThirtyEight.com advertised Trump with a 55% chance of winning the President.

Then came Hillary Clinton, and the fawning marginalized media went to work suppressing Bernie dissenters, propping up the sick old lady (who was pretending to be healthy). Clinton was grabbing all the attention, and the Democratic Party candidate (despite lying, cheating, and stealing) was the nominee.

She is losing Ohio.

Colorado is not the sure thing that the Democratic Party thought it would be.

Florida, Iowa and even Georgia are jelling into distinct hues of red for Election Day. Republicans are achieving notable successes at the state and local level, all of which is strengthening their brand while broadening their base.

Iowa has more Republican than Democratic voters, and the registration gap is narrowing faster than ever. US Senator Chuck Grassley took the lead on fighting illegal immigration, including sanctuary city policies, and is now double-digits ahead of her Democratic challenger. Iowa is a Republican state by and large. Grassley recently praised the campaign chairmen in each of the states 99 counties!

Grassley has the grassroots, and they are going to grow into an epic victory, and pull the Hackeye State into Trump's column, too.

The one month swing is not lost on Five Thirty Eight, either.


The latest Five Thirty Eight map depicts the following outcomes based on the latest polls: 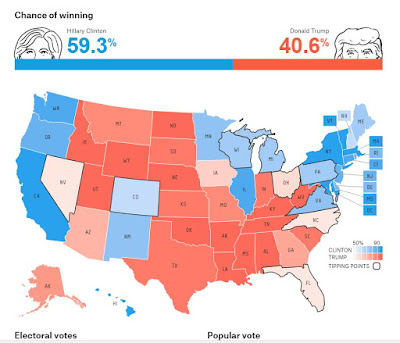 Notice that Nevada has taken a light pink hue, too!

North Carolina, Florida, Ohio are getting snuggled into the Trump column

What does this result yield for Donald? 265 Electoral votes.

If the polling in Maine remains consistent, then Trump could pick up at least one more Electoral vote, since Maine apportions their electoral votes based on proportional representation (one for each House district, and two votes to the candidate who wins the statewide popular vote)

Here's my current analysis on the Electoral college turnout for Election 2016: 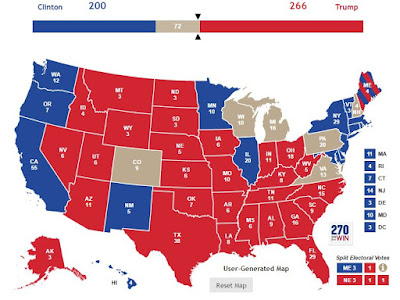 I give Trump that one vote in Maine, and I expect him to carry away all five electoral votes in Nebraska. He might scoop three of the four votes in the Pine Tree State. After all, Ted Cruz won the primary caucuses, indicating a decisively conservative undercurrent.

The latest polling shows up him ahead by four points in Colorado.

He wins the Colorful state, he gets an off-color win easy.

If Trump wins New Hampshire, which was tilting his way before, then he lands right on 270.

The Granite State might present his best path to victory, but so could Colorado.

He is scoring higher polls in Colorado, anyway, and Hillary Clinton let her guard down long ago in that state. Besides, the state delegates are more energized and organized, there.

But now he has the time to take on bigger challenges in other "solid blue" or "sold out Democratic" states like Virginia, Michigan (where he was tied) or even Wisconsin (which also has a GOP trifecta).

This is Trump's campaign to lose, and Hillary Clinton is all but handing it to him at this point.
Posted by Arthur Christopher Schaper at 2:40 PM