Three weeks have passed since the La Raza radicals, with Torrance Democratic President Jimmy Gow, attacked a private gathering of Republicans in the West Carson Veterans of Foreign Wars Hall. They had moved their meeting, in anticipation of a hateful gathering of anti-social injustice warriors bent on disruption, absent of morals or principled respect for the rights of others.

What do they have to resort to lawlessness and violence?

What they are fighting for has neither truth, nor facts, nor logic.

They are fighting for open borders, widespread amnesty, and the destruction of the Judeo-Christian values which make the United States a destination for immigrants all over the world. Instead of turning this country into a welfare state for the world's ills, We the People need to demonstrate and export our values.

The liberty which We the People enjoy here can take root and flourish anywhere! Yet key principles must be embraced and respected. The Mexican people are learning to honor and demonstrate their natural rights, accorded to us from the divine love of God Almighty!

If people have no awareness of Providence, they will resort to force, violence, and the coercive power of the state.

First, when she started chanting that a black woman was a "sellout."

I confronted her for discriminating against a black woman. She was silenced immediately.

These racist radicals had no idea what to do or say when they were challenged on their abusive talking points.

Check out her scared look in this photo below.

This woman could not look me in the eye when I confronted her for her abusive rhetoric against a minority woman, who was attending a private meeting.

Shameful. What kind of teacher does she think that she is? Does she act like that in front of her students?

And here's more of the ugly behavior that Mrs. Yolanda Gonzalez was participating in.

After the weak and fearful SJWs screamed their loudest to no effect, Yolanda came up to the walk way a second time. 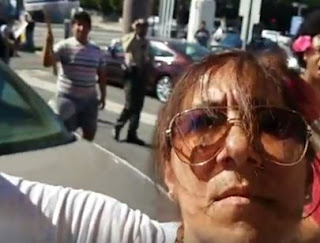 She actually compared the Jews who died in the Holocaust to convicted criminals in a prison. How? She compared the tents used in Maricopa County prisons to "concentration camps." 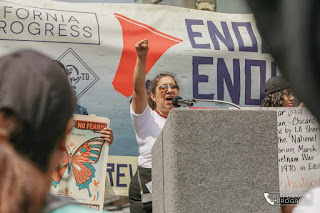 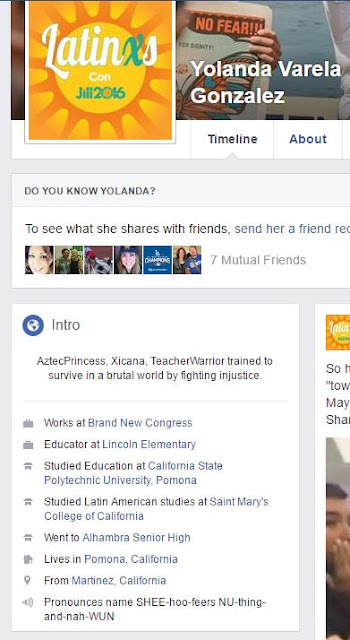 She also styles herself an "Aztec Princess." Huh?

What kind of role model does she serve for students, then?

She engages in abusive SJW tactics, and is preaching a socialist dogma which impoverishes the many while enriching the very few.

This is wrong. She should be ashamed of herself.