The so-called "New Majority" is a group of centrist to liberal Republicans trying to improve matters for the center-right in the state of California. The truth is that they are an organization which focused on fiscal issues, and one of their spokesmen claimed that they have no interest in social or cultural issues.

New Majority promotes a fiscally responsible philosophy in government and an inclusive mainstream approach towards politics.

Through education and contributions, it seeks to inform its membership and contribute resources to Republican and other philosophically aligned candidates and issues that share its mission.

"Inclusive mainstream" is double-speak for culturally liberal, progressive, or neo-Marxist.

The truth is that they are actually quite liberal on those issues, and they only support Republicans for office in the state of California if they are pro-choice, pro-gay marriage, pro-gun control, etc. One candidate in Torrance was running for a seat on the local college board. He was passed over by the New Majority, and they endorsed the Democrat.

The thing is, though, that on their own website they advertise their push for a "fiscally responsible philosophy in government." How can they support any Democratic candidate in California, then, since the state party platform endorses every big government, quasi-socialist push imaginable?

But the New Majority is not

Sometimes, they do good things. They endorsed David Hadley in his bid for state assembly in 2014 and 2016. He would not have won the 2014 election without their help. It was good to have Hadley in office instead of left-wing, pro-sex offender Al Muratsuchi.

However, the "New Majority" has evinced a growing weakness for embracing the left entirely, even supporting left-wing candidates and other Democratic contenders when there is a Republican running for the same office.

The "New Majority" was supposed to be focused on winning elections for Republicans, right? Then why do they donate time and money to Democrats?

Why did they support a brazen, dishonest liberal like Jean Adelsman instead of Councilman Aurelio Mattucci?

Check out this donation to Dishonest Jean's campaign during her failed race for Torrance City Council: 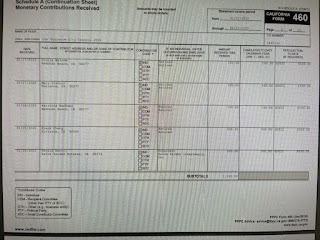 Check the bottom entry, and you will find Gerald Marcil of Rancho Palos Verdes donated $500 to Dishonest Democrat Jean Adelsman.

Gerald, or rather Jerry Marcil, is a member of the New Majority. Click here for more info.

Why did the New Majority stick their noses into a city council race and try to push out a well-known, effective, and established conservative who has helped other Republicans get elected?