The "Torrance Community Group" on Facebook have Schaper Derangement Syndrome.

But their derangement was so bad, that they wanted to defame immigrants in the city of Torrance, too!

Check out what they wanted to do during the Torrance City Council elections earlier this year: 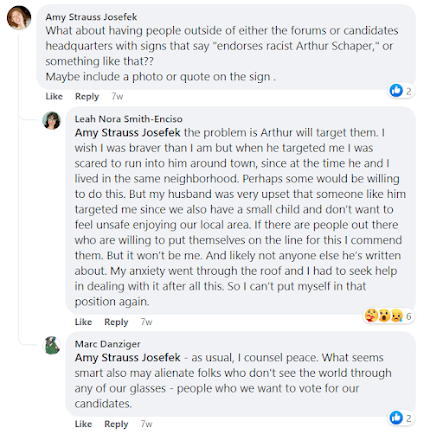 Amy Strauss Josefek is another hater, and she made the following suggestion:

What about having people outside of eitehr the forums or candidates headquarters with signs that say "endorses racist Arthur Schaper," or something like that??  Maybe iunclude a photo or a quote on the sign.

They wanted to defame the candidates whom I supported for Torrance City Council. They wanted to make it seem as though they are racist.

Unlike the hateful (mostly white) Karens in the Torrance Community Group, I do not have a problem with a people who do not look like me. In fact, residents in the 99% Hispanic communities of Huntington Park and Cudahy supported my activism, as did the parents in the 80% Hispanic community of Downey, CA. I have never seen any of those hateful men and women in the Torrance Community Group do anything for anyone who did not look like them.

So, who's the racist again?

But I am amazed at the amount of anti-Asian, anti-immigrant rhetoric coming out of these hateful, left-wing harpies and Karens in the "Torrance Community Group". Why do they have a problem with people who do not look like them?

The problem is Arthur will target them. I wish I was braver than I am but when he targeted me I was cared to run into him around town.

Oh brother! I laughed out loud (yet again) when I read how triggered Leah Nora Smith-Enciso got.

She was shaming and defaming me, and then she throws a fit when I called her out on it.

These snowlakes love to dish it out, but they can't stand the heat when someone steps up and fights back. (There will be more this post later.)

The most important thing in this post, however, is their insistence in trying to shame and defame immigrants and Asian-Americans in the city of Torrance. This is really disgusting! Isn't this the very "white supremacy" that Black Lives Matter supposedly opposes?!

Again, notice how this Torrance Community Group targets Asian-Americans and immigrants. They target two immigrants, Aurelio Mattucci and George Chen, frequently, and now they want to shame and defame Jon Kaji, too. They all remind me of that violent Long Beach-based Karen who was harassing Asian-Americans in Wilson Park for a few months.

Torrance is better than all of this hate, and I certainly hope that the Torrance Community Group shuts down shortly. They have no business stirring up so much hate in the city of Torrance!