What Would You Say? Private Behavior Has Public Consequences

This is an excellent video from "What Would You Say?" 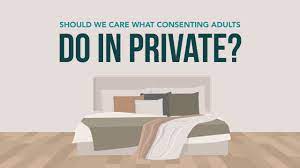 The notion that sex is a purely private act is nonsense. Yes, it is an act to be experienced privately, but the behavior has public consequences.

I commend the Colson Institute for putting together this video.

Here's a summary of the video's arguments:

You’re in a conversation and someone says, “What consenting adults do in private is none of our business. It’s between them, and it doesn’t affect anyone else.”

What would you say?

Sex - like going to the bathroom or taking a shower - is not meant to be a public act. However, though sex is meant to be experienced privately, that doesn’t mean there are no public consequences for the sexual behavior we allow as a society. There are.

So, the next time someone says sex is merely a private act, here are three things to remember:

Third, our sexual experiences affect our mental health and deeply shape our character.

I would add that the loosening of sexual mores has contributed to the growing moral decline in this country as well as around the world. Let's not forget that children who are not reared in stable, committed two parent homes (one man and one woman) struggle with a host of quality of life issues.

Indeed, sexual behavior has consequences beyond the bedroom, and the government does regulate said behaviors. Since when did "Live and Let Live" become so prominent a talking point in our country and our culture?