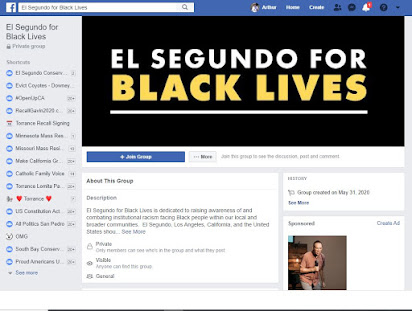 Amanda Touchton of Black Lives Matter, El Segundo got yet another rude awakening.

She wanted to help a black woman play victim, who had been pulled over in the city of El Segundo last year. Whether she likes it or not, people get pulled over in El Segundo along Pacific Coast Highway from time to time, and it happens to people of all colors, creeds, and backgrounds.

She and her "son" Elias Garcia, were filming three El Segundo police cars who had pulled over a driver.

This driver was a single black woman, and right away Amanda Touchton and company are convinced that she is automatically a victim. That's racist, isn't it?

After recording the incident, Touchton talked to the black woman, to find out what happened.

The black woman admitted that she was driving with a suspended license. OUCH! 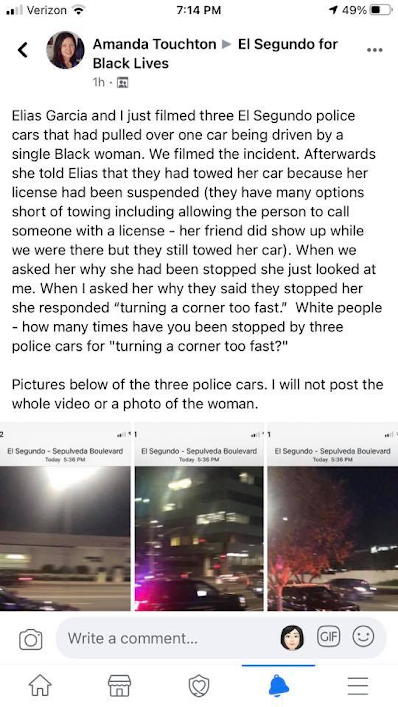 That woman was driving with a suspended license. She was breaking the law. Is Amanda suggesting that there should be two sets of law in this country, one for black people, and one for white people? Really? Again, that sounds racist!

Of course, Amanda wants to play up this hollow narrative as though the black woman was victimized for "being black".

But hold on a second ... she was driving with a suspended license! Hence, her car was getting towed.

Let's have a discussion about that, Amanda!

Granted, does it really take three police cars to deal with someone when they get pulled over? We can have a discussion about that.

I have noticed that the El Segundo police department often brings forth three police cruisers when someone gets pulled over along Pacific Coast Highway in El Segundo. Is that too much? Perhaps. Again, I am willing to have that discussion.

However, please do not play the race card on this situation! That is ridiculous!

They also feel scared about speaking out. They fear for their safety and their job security. They also hate the fact that children in the El Segundo community are being brainwashed to hate their city, to hate the United States, and to think that being any other skin color besides black is some kind of sin or source of shame. You have brought this division and hatred to the El Segundo Community, El Segundo is better than all of this hate, and you should be ashamed of yourself.

And you have the audacity to defend this woman, who was driving with a suspended license? Really?!

Of course, the biggest hypocrisy is that Amanda Touchton didn't really do anything about this case of alleged racism in the first place! 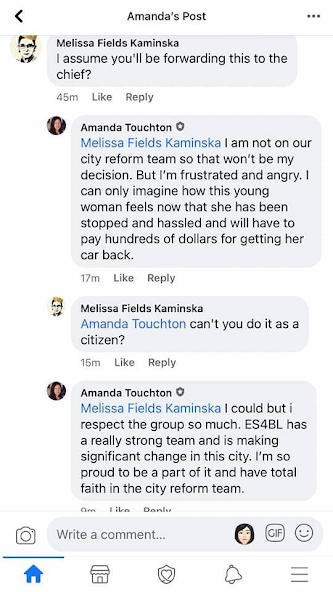 Amanda Touchton, a citizen and resident of El Segundo, refuses to report anything to the El Segundo police. Really.

She wants "El Segundo for Black Lives" to do all the work. What gives?

If black lives matter, Amanda, and you are convinced that what the El Segundo Police Department did is an example of "institutional racism", then why not report it?

I guess black lives really do not matter to Black Lives Matter, do they, including the BLM group in El Segundo. Indeed!

Posted by Arthur Christopher Schaper at 11:19 AM