I know that the "Stay At Home" or the "Shelter in Place" orders are a pain.

However, don't let this slowdown or shutdown get you down.

This Coronavirus problem is solving a number of problems which have lingered in our culture for a long time. So many people have been overrunning and dishonoring multiple boundaries, but the natural order is being restored, even if it meant forcing people to slow down and stop:

So many pro-gay programs and movements are getting shut down left and right, as well. This is the very brake that was needed to put a stop to so much for this perversity.

Even the California State Legislature has gone into recess! The state of California has two constitutional deadlines which they cannot ignore: June for the budget, and August 31 for the end of the legislative term. The state legislature cannot get around those deadlines, which makes it all the more likely that they will not be able to hear the scores of really bad bills coming down the pike.

However, Assembly staffers are still taking phone calls, and we have this great opportunity to overwhelm the offices of two key lawmakers and stop two really bad bills. 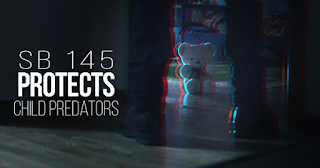 1. SB 145, otherwise known as "Sex Offender Amnesty" or "Pedophile Amnesty"
This bill is as bad as it sounds. In spite of the really snide remarks that I had received from State Senator Scott Weiner's office, this legislation really does amount to allowing adults to prey on kids and avoid the sex-offender registry. Yes, indeed.
Please contact Asm. Lorena Gonzalez' office. She is the Chair of the Assembly Appropriations Committee, which is holding this bill for the time being. A hearing should be scheduled in the middle of May, but we can stop that from happening! 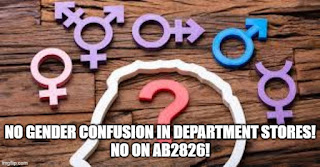 2. AB 2826, or Gender-Confused Department Stores for All
This is Evan Low's latest terrible, pro-LGBT bill. This legislation would require department stores with more than 500 employees to phase out boys and girls sections for toys, clothing, and other goods.
1. This legislation is a complete waste of time, ignoring the more pressing needs of the state of California.
2. Phasing out the differences between male and female is child abuse.
3. This proposal is dangerous to the health and well-being of children. Boys' and girls' clothes are distinctly different, and must be presented that way.