God is Enforcing Righteous Boundaries in a Lawless World

"For the mystery of iniquity doth already work: only he who now letteth will let, until he be taken out of the way." (2 Thessalonians 2:7) 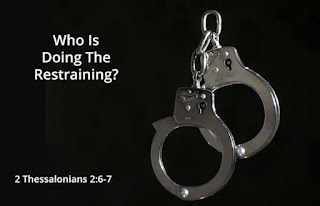 The COVID-19, or the Coronavirus, is spreading around the world.

Nations are closing up their borders. Leaders are enacted strict orders forcing the closure or limitation of public gatherings. Even the most liberal, progressive, "accepting" of leaders is not allowing large gatherings because of the potential spread of infection.

Why is this happening? Why is the viral spread racing around the world?

What's happening is that God has stepped in and is now in forcing boundaries that people have not submitted to.

The politicians, the leaders in many countries have insisted on rebelling against the laws of nature and nature's God. Men and women who have rejected God's loving boundaries are now forced to comply with boundaries of some kind because the consequences of death are final and unremitting.

Progressives have wanted open borders. Those open borders come with too, too heavy a price. Even regressive, left-wing mayors, governors, and national leaders cannot allow for open borders anymore.

God is enforcing boundaries on a lawless world.

The entertainment and sports industries, too, have been promoting rampant, godless defiance. Now they are paying a price. Their performances are getting shut down. The sports competitions are in freefall. They will be forced to compete in empty stadiums before empty seats.

The movie industry was already in freefall, and now it's falling even further. This is big!

Schools will be forced to close for the next two weeks in a number of states, including California. What will the families do with their children, though? They have to provide daycare for a number of them, don't they? In California, independent contracting work has been banned. That means independent caretakers can't operate anymore! I wonder how those parents, those voters will feel come November! This is going to be interesting.

On a broader note, indeed God is starting to enforce his judgment, His moral righteous outlook in this fallen world.

Oh, how the mighty, the arrogant have fallen! Indeed!

Bad people are not getting away with the bad things they have done.

Bad leaders are not getting away with their evil deeds, either. The President of China, Xi Jinping, has been widely criticized for his disgusting failure to handle the Coronavirus pandemic. The peasant populations in China are not following for his flimsy propaganda, either.

Men and women around the world have invested so much in their work, in their money, in their personal legacies. Now, they need to pay more attention to receiving the grace of God. They need to put God's Word, God's Love, God's Grace first and foremost.

That is a core, essential boundary.

Nation states are God's will. God purposed nations to exist. The open borders powers that be in the world are militantly anti-God, militantly anti-Christ. This Coronavirus catastrophe is forcing countries to abide by God's natural law once again.

Check out what else has been slowing down around the world since the outbreak of the Coronavirus:


Mexico is considering closing its border to stop Americans bringing coronavirus into its country https://t.co/crjGjlnPQq
— Daily Mail US (@DailyMail) March 13, 2020


Mexico is building the wall, and they are paying for it!

Abortion clinics are shutting down all over the world, too. This is really stunning!


There's nore good that is coming out of this Coronavirus crisis:

The Corona Virus is shutting down:


Matthew could not have listed it more quickly, more succinctly.

Mass migration and immigration in general is coming to a halt. God loves nations, God loves borders, and indeed He does love all the children of the world. Since when did this foolish idea emerge that man's only chance for hope was to flee to another country? The Middle East is not going to get better if young, able-bodied men migrate to Europe. It's an invasion, nothing more.

The same crisis of migratory pressures is facing the necessary pushback which countries needed to flex and flow in decades past.

I think it's telling that sports and their venues are closing down. I recall Kent Christmas' prophecy, that sports events and professional sports entertainment would fall into decline because they dishonor God's day of rest.

Consider also that Hollywood has had to slow down and eventually shut down. There has been so much evil, so much coarse fraud coming out of Hollywood for decades. Now they are finally paying a price. Not just with the conviction or high-profile producers and actors, but the downfall of other entertainers, who thought that they were a law unto themselves. The movie theaters are empty. Hollywood is losing money, losing talent, (they already lost integrity), and now they are losing power and relevance.

Colleges are closing up. They are cesspools of lies, deceit, and hatred in the United States, and even throughout the world. Young people's minds are being molded to despise what is good and celebrate what is evil, all on account of these perverted, distorted universities, all of which have lost touch with reality, responsibility, and accountability. Students cannot go to their college courses now because of the potential spread of disease. They will learn more in the real world, resting on their own.

From the closure of colleges also comes the closing of government-run public schools throughout the United States. Children across the United States have been indoctrinated to hate their country, to have the rule of law, to hate people who do not look like them. They have been taught that there are multiple genders, and that individuals can sleep with whomever they want, without consequences. In short, students are being lied to in America's government schools.

And now they are closed. In Los Angeles, they will be closed for a record three weeks. This is going to be great. Those kids will learn more on their own, reading books or playing video games, instead of going to those horrid, unsafe, immoral government schools.

And the good news just keeps rolling in. So many silver linings to this Coronavirus crisis:

There are some upsides to the virus


Drag Queen story hour programs are getting cancelled all over the country, too! Finally! These perverted programs are an affront to parental rights and natural affections. They should have never taken place in the first place. They are a violation of the very principles of male, female, right and wrong. It makes perfect sense that a viral outbreak would shut down these perverted programs.

And the people who have celebrated these perverted programs are facing consequences, too!


Friends & Neighbors – I want you to know that I’ve tested positive for COVID-19. Here’s an update and video. pic.twitter.com/PIH7nuA4uF
— Steve Padilla (@StevePadillaCV) March 15, 2020


"Gay" councilman Steve Padilla has been promoting LGBT themes and causes, to the great detriment of the city of Chula Vista and the vast majority of residents who opposed the perverted Drag Queen Story Hour program. Now he is afflicted with the Coronavirus. One has to wonder how many people he has been in contact with. Does he have other sexual partners who have been infected? This is a natural consequences for his unnatural behaviors, to put it bluntly.

The whole LGBT mafia is facing a full-court STOP to the promotion of their perversion. This is truly a righteous set of outcomes.

And guess what else has been shut down?


I’ve noticed that Ellen Degeneres and Joy Behar have both said they’re taking a leave of absence from their shows because of Coronavirus. Meanwhile, @JudgeJeanine, Jesse Watters and the regular Fox anchors were on the air tonight keeping calm and carrying on. #LiberalsSuck
— Marlene Dietrich (@Marlene2761) March 15, 2020


Ellen Degenerate, who pushed the LGBT agenda right into our faces, starting with her sitcom, which floundered and tanked following her decision to "come out". Now, we have to witness her and other LGBT stars and celebrities force their agenda into every aspect of our lives. At least she will be going away.

And let's not forget that perenniel kvetch, witch, bitch-and-moaning hatemonger Joy Behar is shutting herself down, too. The silver linings are beginning to overtake the dark clouds, to put in mildly.


This Coronavirus is putting an end, or at least a major pause, to many great evils in the world. Bad people cannot do their bad things now that they world has all but come to a halt, and that is fine, well, and good.

There has been an increasing, encroaching spirit of iniquity, spirit of lawlessness all over the world. The governments at the local, state, and even national levels have either recognized the challenges and want to fight the evil, want to restrain the evil, or they have accommodated and enabled all this evil.

But this enabling is coming to an end. God is enforcing righteous boundaries in this lawless world, and it could not have come at a better time.

Email ThisBlogThis!Share to TwitterShare to FacebookShare to Pinterest
Labels: 2 Thessalonians 2:7, borders, Coronavirus, COVID-19, Law of the Spirit of Law, Laws of Nature, restraint, rule of law