Some people may wonder why I as a pro-family activist spend time reading over the websites and news stories promoted on pro-gay, left-wing websites.

This tactics for staying informed is precisely what the Communists do. We have to know what our ideological enemies are reporting, promoting, and planning. In his book "Dedication and Leadership", Douglas Hyde related how during his training as a Communist, and then as a tutor who helped engage and train other communists, he would read over the pro-capitalist and mainstream newspapers, then present the stories from a Marxist perspective.

Furthermore, reading up on the LGBT websites and reports informs us about pro-family victories, even though they will report them as defeats and setbacks.

Last of all, the homosexual reporters and promoters inadvertently make the case that pro-family activists have been making for years:

1. Individuals engaged in the LGBT culture are naturally promiscuous, and thus fall into many high-risk behaviors.
2. Homosexuality, transgenderism, and other paraphilias are fraught with disease. 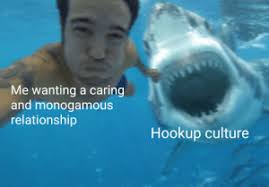 This latest article from Queerty confirms the latter, how the non-stop hook-up culture of the LGBT "community" is quite harmful to the health of those who fall into it, and how these behaviors hurt the culture at large:

ER doc pleads with gay guys to “Stop hooking up”

As the coronavirus pandemic drags on, a gay ER nurse has voiced his frustrations on Reddit, begging gay men to stop hooking up.

Check that out. An openly gay nurse has ripping on other members of the so-called LGBT because they insist on their destructive, promiscuous habits.

Homosexual behaviors are inherently selfish, too. There is such a need for pleasure, for any kind of replacement for the love that they have not received, that they endanger their lives and the lives of others. With the spread of Coronavirus, these self-serving behaviors are not just harming willful participants, but healthcare professionals doing their best to stem the tide of this flu.

“I’ve worked countless hours trying to protect myself and others with limited PPE [personal protection equipment] and treating patients, and seeing posts saying things about how fun the weekend was […] makes me sick!” he wrote. “I especially am infuriated by the men who are well educated and continued to go out and decide to post about it. Men who are fishing for likes on social media and have no idea what kind of privilege they have.”

Now we find all this talk about "privilege." At least this homosexual admits that the whole gay scene has a "privilege" problem. Of course, the scope of this problem is much greater, since the LGBT agenda has forced its way into so many facets of our everyday lives. People cannot walk through their local malls (well, they could before the stay-at-home orders) without seeing public displays and promotions of LGBT ideologies. It's gone from Gay Pride Month to Gay Pride Year, and anyone who complains gets hounded, booed, and shouted down.

Indeed, there is gay privilege around the world, and now it's harming public health.

Commenters echoed his thoughts. “If HIV couldn’t stop people from having unprotected sex with a stranger, you really think COVID-19 will stop them from going out,” wrote one. “People are choosing to be ignorant bc party, sex and drugs is more important than a fucking life, you might not be that affected by it, but some boomer, or a cancer patient going through treatment, people whose immune systems are weak, they can die bc of your lifestyle, please stay at home.”

Great points! People who engage in risky, unprotected sex, or orgiastic behaviors--all very common among homosexuals--are taking away resources from people who have unwittingly, unwillingly contracted the COVID-19 virus. Of course, the unsanitary behaviors which they engage in are spreading the disease. They need to stop thinking about pleasing themselves, and think about what is best for all, including themselves.

“I have nothing but love for the LGBT community,” wrote another, “but stuff like this makes me embarrassed to be a part of it. I already get disgusted by gay/bi men who communicate in dick pics and random hookups, and it’s even worse when we should limit contact with other people to prevent a global pandemic from getting out of control. I don’t know who needs to hear this, but stay the f*ck home.”

If you truly have love for the LGBT Community, you should tell them to "Come Out ... Come Home." More than merely staying home, people in bondage to these behaviors need to be set free from the pains and hurts which have induced these desires.

The fact that the gay nurse had to plead with homosexuals to stop engaging in ... homosexual acts pretty much says it all. Promiscuity and sexual risk-taking are all too common among homosexuals. These facts cannot be denied, and even the most openly, promotionally gay activists cannot hide these facts.

Despite the fury, other commenters dissented. “Intimacy is a fundamental need and it’s wrong to condemn that,” one commenter said. “It’s easy to write it off as just stupidity (which in some ways is being unable to get higher-level functions to control lower-level cognitive needs.).”


Two men or two women abusing their bodies is not intimacy. How can there be any intimacy in a sexual relationship if there is abuse, disease, and even bloodshed? There is some truly amiss about any group of people who insist that they way they show true love to one another--or seek intimacy with one another--is through sodomy, lesbianism, and other sexual paraphilias.

Other commenters took issue with the author’s criticism of gay people. “Just gay people?” questioned one poster. “Dude, I’d say EVERYONE needs to stop going out.”

Why is there all this shock and offense? Because high-risk sexual behaviors are endemic, essential to the whole homosexual scene. No one likes hearing the truth if it cuts to the core of their identities.

“I understand your anger and frustrations,” another writer empathized. “Having lived through the HIV/AIDS crisis, and losing too many friends from sheer, unadulterated stupidity, my anger is boundless at this disrespect for ALL human beings, not just the LGBTQ+ community. With my deepest, sincerest gratitude, THANK YOU for the work you’re doing.

"Unadulterated stupidity", one commentator writes. Oh, the irony. Homosexual conduct is rife with adultery, too. Men who step out on their wives and sleep with other men, for example.

The gay nurse should be commended, to some degree, for having the courage to speak the truth to his fellow homosexuals. They should stay home, certainly, but more importantly they should abandon the perverse, destructive lifestyle--or rather, deathstyle--which is killing off their numbers.

If we go to the heart of this issue, we should have the courage to declare that no one is born "that way." It's not an identity, but a set of behaviors, and people do not have to think that they are enchained, bound, in bondage to these beahviors, feelings, ideas, or conducts of action.

Whether homosexuals and their allies want to admit it or not, homosexual conduct is fraught with disease, dysfunction, and death. The hurt and pain which drives homosexuals to engage in such rampant, promiscuous, self-loathing before cannot be ignored.

And no one should be surprised that they end up going to such lengths for "intimacy", which in fact is nothing more than casual hook-ups overrun with devastating, unintended consequences.

Posted by Arthur Christopher Schaper at 9:28 AM