In the Beginning, God Discriminated

oh if only god could see how discriminatory you are. oh wait! he can cant he :( isnt that exactly what the bible says not to be? cry me a river lmao
— aves has not brought out the tiger (4/4 slots) (@avamondaze) March 31, 2020

I was writing about the fact that people in this country are getting tired of being reminded, prodded, shamed, and reprimanded about the so-called hardships of "transgendered people".

Seriously, why are we expected to feel sorry for people who are in bondage to a mental disorder, and then insist that the rest of us should feel sorry every year? This idea of "Transgender Visibility Day" is absolute nonsense.

In fact, when parents are molding their children to change their sex, it's nothing more than child abuse!

So, this pro-tranny activist shamed me because of how discriminatory I was. She wanted to bring God into the mix, and she/he/it (who knows!) made it seem as though my thoughts on denouncing transgenderism were unbiblical, unholy, unkind.

Well, she ought to open the Bible, and she will find that In the Beginning, God Discriminated!

"recognition and understanding of the difference between one thing and another."

Granted, there is another definition which touches on prejudicial or preferential treatment for one category or thing versus another, but let's focus on the main definition provided above.

In the Beginning, God Discriminated.

Consider the first verse of the Bible:

"In the beginning God created the heaven and the earth." (Genesis 1:1) 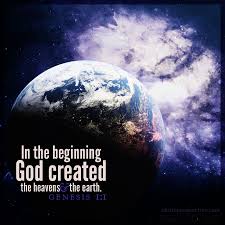 Notice that God divided the waters, so that the heavens and the earth would emerge as distinct entities. That's the essence of discrimination.

Before separating the earth and the heavens among the waters, God brought forth Light:


3And God said, Let there be light: and there was light. 4And God saw the light, that it was good: and God divided the light from the darkness." (Genesis 1:3-4)

God literally said "Light Be", and light was. This Light is not the sun, but His Son, Jesus. As He declared during His earthly ministry:

"Then spake Jesus again unto them, saying, I am the light of the world: he that followeth me shall not walk in darkness, but shall have the light of life." (John 8:12)

At any rate, light stands out clearly and starkly from the darkness: more discrimination. There is darkness, and there is light. Light is called to be the focal point, as well. God is light, after all, and in Him is no darkness whatsoever (cf 1 John 1:5)

There one sees both types of discrimination. God gives precedence to the Light over the darkness, not just merely distinguishes the light from the darkness.

And that's the way it should be:

"17And he is before all things, and by him all things consist. 18And he is the head of the body, the church: who is the beginning, the firstborn from the dead; that in all things he might have the preeminence. 19For it pleased the Father that in him should all fulness dwell;" (Colossians 1:17-19)

In the beginning, God discriminated. 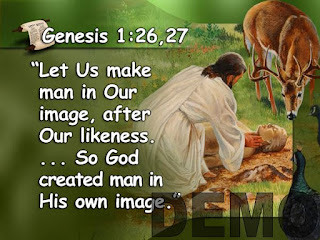 Man is qualitatively different from all the other creation.

Why, because God said: "31And God saw every thing that he had made, and, behold, it was very good. And the evening and the morning were the sixth day." (Genesis 1:31)

When God made man, He declared His work finished (another discrimination, finished before unfinished), and He called all of it "Very good" as opposed to "good."

These distinctions are fundamental, essential, and inescapable.

In the Beginning, God Discriminated, and It was Good. It was Very Good.