From August 2015 until early 2018, I had been hammering the Huntington Park City Council for their perverse, immoral, and illegal decision to appoint two illegal aliens to city commissions.

Here's the first report that I had read about this miscarriage of the rule of law.

This effort was the first of many later forays to political activism for me.

Just for context, it was in Huntington Park that I was arrested--without cause or justification, mind you. The city council had no right to remove me because I had not disrupted the meeting in the first place. That was my first, and hopefully last, stint in a jail cell. Two hours of resting, and then I was released ROR.

At any rate, I still attended Huntington Park city council meetings, protesting the appointment of the two illegal aliens. Later on, we crowed victory when President Trump finally repealed DACA. Some of the Brown Supremacists and open border bigots who had counter-protested against us also showed up, but they had egg on their face that evening.

Looking back on those days, I can see that I had bee struggling so hard to make outcomes occur, as though everything happening in this life depended on me. That was a hard aspect of my character that God had to refine out of me, but refine me He did.

At any rate, why am I bringing up Huntington Park now, since all of that is yesterday's papers?

Well, for starters the two illegal aliens who had been appointed to to the two commissions?

They are gone! Francisco Medina and Julian Zatarain are GONE!

Some of the team from We the People Rising continued to protest at the city council meetings and at the different commission meetings for the two illegal aliens. The ruckus which followed was quite something to behold. The chief of police, Cosme Lozano, and other police officers would show up to escort the illegal alien to his car while members of the team would follow them out with signs and recording devices.

At any rate, now they are gone. So much for their big splash into the national media. The councilmembers in Huntington Park turned their city into a laughing-stock of crime and corruption. It is now one of the worst, if not the worst city to live in, according to Business Insider.

Forget "worst", it's The Most Miserable City!

You cannot make this stuff up!

Oh, but it gets better! 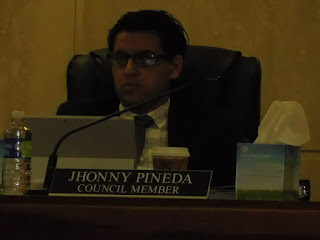 In fact, he placed dead last on the voting list after the March 3, 2020 election!

Dead last! You can't make this up, either. All of this is quite vindicating.

Thank God for President Trump and his enforcement of immigration laws, borders, and policy.

Let's face it: the Trump Administration has been more than a pre-emminent ally in pushing back on all of this open borders, illegal alien, and sanctuary city nonsense.

In fact, Trump just notched up a considerable victory in the Second Circuit Court of Appeals, which announced that the Trump Administration has every right and power to cut funding to all cities not in compliance with immigration laws, nor working with federal immigration enforcement partners like ICE.

The lessons I learned from this whole process:

It was really tough for me to trust God to handle all of these evil people. Over a two-year period, I woke up nearly every day convinced that if there was evil in the world, it was up to me to fight it. It took all the setbacks which rolled out from (false arrest, false conviction, unjust sentencing, etc.), but today I feel just like Job:

God is really taking care of me, and He has been on the job, on the move working before and behind me all this tikme. Jesus saves me every day, but for the longest time, I would wake up every day convinced that everything in this life depended on me. "It's up to me to get the ball rolling. It's up to me to start the day, and to get everything done." Today, I see how active, how alive Christ Jesus is in my life! He gets the day rolling, and I just jump into His River of Life.

I also learned how important it is for us to pick our fights. Wherever we want to be active to accomplish an outcome, we have to:
a. get the support for the locals (lots of locals)-- or forget it
b. We have to figure out the goals that we want to see accomplished--and how to leverage the power to get it.
c. Plan ahead to build our numbers. That is so key!

Because of all that I went through with We the People Rising, I must say I learned a great deal about activism, and how to work with others to marshal support and accomplish real outcomes. Now I am a full-time activist for MassResistance!

I remember in early January 2016, when I shared with other activists that it was probably best for us to pull up stakes and move on from Huntington Park. What were we accomplishing, exactly, in that city? At the time, I wish I had followed that piece of advice.

I then recall in early 2018, when I did not have a car to my name at the time. I realized that I had been going to those city council meetings in large part because other people had been pressuring me. At that point, I literally did not have the money, the resources to keep going. One person who had been expecting me to stay on that issue even offered to pay $100 so that I could rent a car to go to Huntington Park. At that point, I had to give up and say "I can't go this time."

"If you don't go, then we are going to abandon this project and work on something else," was the person's response. I realized then that I could not be bullied into this. There was no time, money, resources for me to keep doing this. At that point, the person I was speaking with dropped the matter, and that was the end of it.

Two months prior, I can say that that was a very dark time for me. I had no car, no steady income, no idea where I was going, what I was doing, plus the legal matters that I was facing. It seemed like such a dark time. Now, I look back on all of those hardships, and I see that God was really trying to prod me, to give up all my self-efforts, to give up striving in the flesh to make outcomes work, as though everything in this life depended on me. At the time, I had no wide-ranging, strong revelation of how great He is, how much He is watching out for me.

There were so many inner tensions that were prompting me, that were pressuring me. It seemed that every major political matter depended on me in some way for the right and righteous outcome to take place.

After I rejected my colleagues offer to go to Huntington Park again, things started to ease up in my life. I finally said "No" to a friend and a fellow activist, and I did not allow a sense of unrest to prod me further, this unrest that was born out of "If you don't do this, then no one will do it."

It's amazing the good that followed me after that time.

Slowly but surely, I was able to get a more stable income. I was reading God's Word much more, as well. Around that same time, I was going to other city council and county board meetings to urge
elected officials to take a stance against SB 54, California's notorious sanctuary state law. Finally, We the People Rising and other pro-enforcement groups could celebrate victories taking place throughout Southern California. From there, by the grace of God, my regional and national profile increased.

Then in the first week of July 2018, MassResistance hired me and I got a new car (well, a used car, but it was certainly new for me).

Things really took off from there for me since then.

And now, nearly two years later, everything that I had been hoping for has finally come to pass. I remember hearing God telling me: "You need to stop demanding that you can take action, gain satisfaction over your enemies your way. Sit back, relax, and let me handle it."

And handled it He has!

I would not let go or change anything that happened between August 17, 2015 (the first time that I spoke out at the Huntington Park City Council meetings) and today. Not one thing. He makes all things work together for my good, after all! (Romans 8:28)
Posted by Arthur Christopher Schaper at 10:44 AM