The national and statewide races were not the most compelling element of the evening for me.

Two Democrats running for US Senate.

Dem on Dem fights throughout the state.

I was not as dismayed about David Hadley's second place showing. After all, the turnout throughout the state was huge for Democrats.

Things will not go so well for them in November, I fear, if the civil between Bernie Sanders socialist-activists and the pro-establishment Hillary Clintonites dos not heal.

But right here in Torrance, CA, a restoration of good government and positive principles won out.

Check out the final tally: 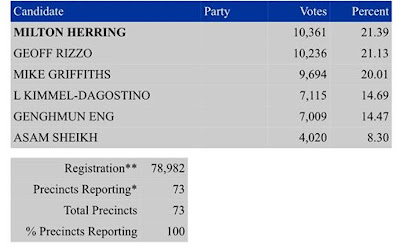 At 11:00pm on Election Night, Milton Herring was in third place.

At the end of the final tally, Milton Herring--father, pastor, retired military officer--was in FIRST place.

From what I have heard, Herring was the last political client for consultant Paul Nowatka, who has served as a Torrance police officer, city councilmember, state assembly candidate, and Republican party central committee chairman.

What a way to end a storied career in The Balanced City! Thanks for your great work, Paul!

He is also the first African-American elected to the Torrance City Council.

I also want to stress that he is a Republican!

Here are some of his comments about his political affiliation:


I am a Republican because I believe in the prosperity of America and believe that the Republican Party’s approach is the most prudent one. I believe in strong families are the foundational social order and defining marriage between a man and a woman is the Capstone of the family. I believe in the support of Israel. It is the party that was founded to prevent slavery from spreading into the new Territories and it is called the party of Lincoln. We promote limited government, and maximum freedom. This party led to fight for the 13th, 14th and 15th Amendment to the Constitution.

Wow! Milton makes me feel proud to be a Republican.

I look forward to his leadership and representation on the Torrance City Council.

We have longed for honest government in our city. Since the fallout over Mayor Pat Furey's corrupt practices and disrespect to voters and homeowners in the city; plus the fallout over his corrupt son's campaign lawlessness, the residents of Torrance are looking for honesty and integrity once again.

Sandra Goetz could not have said it better: "The residents of Torrance elected an ordained minister to city council, and he won with the most votes. The city sent a clear message to the city council. We want good government."

I candidly share that I had concerns about Rizzo. I respect very much his service to the city, including his long career as a police officer and member.

He is also receiving a pension from the city of Torrance. Six figures!

The city needs to address its long-term pension obligations. Certain reforms have been effective, but leadership needs to ensure that public revenue goes toward addressing all public needs.

I have remarked also that he has taken bolder steps to address concerns about public safety and integrity in the city. He is thoughtful and deliberate. He has repeatedly taken time to sit down with me and share his concerns.

I do not see him as corrupt or badly influence in regards to the McCormick vote. Please keep in mind that Councilwoman Heidi Ashcraft wanted to end the contract, but did not receive enough time to review the other bidders.

He is respectful and knowledgeable, and he cares about this city. I had no reservations voting for him.

This candidate has been the most surprising and welcoming of all.

I had not given Griffiths a great deal of hope or attention during Election 2014.

I had sent out a series of questionnaires to a number of candidates, and he did turn in his answers to me on time (I admit I had not articulated a clear deadline).

To see a candidate who had finished in eighth place, then receive an appointment to the council--I thought something fishy was going on.

Or at least that this process was unfair.

And yet Griffiths has articulated the need for a number of key reforms. He has sought ticket forgiveness for city residents who park on the street during the widespread street-sweeping days. He called out Mayor Furey for his controversial, now corrupted, vote for ending the city contract with Gerber and taking on McCormick,

He also aided with the push to remove Patrick Furey Jr. from the Torrance traffic commission.

I underestimated Griffiths, and I am glad that he won his seat in his own right.

Election 2016, June 7th was a good night for this Torrance Republican!