One of the most crucial trusts that we lay on our government is safety and security.

We have government to secure our rights.

To protest us from enemies both foreign and domestic.

Today, our President does not stand up to evil. He does not seem to believe in good or evil at all.

Tolerance is the all-encompassing value.

If you call someone out for doing something wrong or holding values which others do not agree with--because of stubborn things like "facts"--you are labeled intolerant, bigoted, racist, or backward.

All of the name-calling means nothing when your life is threatened, when your sense of safety and security is precarious, when the evil in the world get away with their wrong-doing, and the good are punished, or not allowed to retaliate.

His eblast deserves more credit than the media offered:

The horrific attack that took place this past weekend reveals how weak the leadership is in our country. My thoughts and prayers go out to the many friends and families affected by the events in Orlando, Florida. I am going to be a President for all Americans, and I am going to protect and defend all Americans. We will not stand by and allow another tragedy like this to happen. We are going to make America safe again and great again for everyone.

As of last Tuesday, the primaries have officially ended and I received more votes than any candidate in the history of the Republican party with big wins in California, Montana, New Jersey, New Mexico, and South Dakota. While we continue to unite the Republican Party we have started to direct our attention to November and making sure that Crooked Hillary never again steps foot in the White House.

"We will continue to unite ...". Indeed, Donald Trump has his work cut out for himself. He has cut so many other candidates, sometimes in despicable ways. 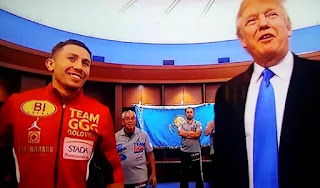 Then again, tough times are demanding tough measures. Instead of third-party bid or "NeverTrump" Trumpertantrums, it's time for voters of all ideological stances to recognize that confrontational executive power is needed under law, and in the face of such desecrating wickedness.

On Thursday we hosted members of the Trump Victory Fund which will help us win in November by raising funds for the campaign and Republicans down ballot to ensure that we have the support we need from Republicans everywhere.

Now he's talking like a team player. Bernie Sanders understood that his campaign is not just about himself, but about governors, U.S. Senators, and state officials. Local officials can ride his wave, or crush under his warp.

On Friday we spoke with faith leaders in Washington D.C. at the “Faith & Freedom Coalition’s 2016 ‘Road To Majority’ Policy Conference.” We discussed the sanctity of life and protecting religious liberty. Afterwards we left DC, and held a massive rally in Richmond, VA, working to garner support in a key battleground state.

There will be another communication with faith leaders in the next week. He needs to heed the concerns of the God-fearing faithful. We are a nation under God, or a nation gone under.

On Saturday, we held rallies in Tampa and Pittsburgh to thousands of supporters!

He is focusing on swing states. Excellent. Some conservative pundits believe that this election will come down to the Keystone state, which has not gone Republican since 1988. The worker-bent of the Trump campaign may succeed in flipping states in the Rust Belt long resistant to the GOP message.

Today, I will be delivering a major speech from Manchester, New Hampshire, devoted to addressing the serious threats facing all Americans, national security and my solutions for making this country safe again.

Public safety and national security--those two issues have often swayed liberal-leaning voters to the Republican Party, even if they vote for Democratic candidates down-ticket. They want a clear-cut leader who recognizes the enemy and fights to win.

Tomorrow, we will be hosting a campaign rally in Greensboro, NC which will kick off a week long campaign swing through America!

Whether Republicans like it or not, North Carolina is turning into a wary swing-state. We cannot afford for the Democratic Party to peel away key states in the South.

Thank you again for your support.