Well, this should be interesting.

Steve Frias, the Rhode Island National Committeeman, the conservative with a penchant for history -- is running against the Goliath of the Rhode Island Democratic political machine Nicholas Mattiello, the unlikable--yet more than likely--successor to former Speaker Gordon Fox, who went from the state house to the big house.

How many stones does he have in his sack?  David only needed one, and he was planning on knocking down Goliath's four brothers. Surely it won't take so much fire power to bring down the Democratic Speaker of the Rhode Island House, will it?

I applaud anyone who will take on the leader of the rotten pack of wolves.

Here in California, the state Speaker of the House, Anthony Rendon, is sleeping with every special interest in Sacramento.

Hardly anyone has heard of the Democratic dominator in California.

I am certain that everyone ... everyone has heard of Mattiello in Rhode Island.

What are those people on Smith Hill thinking?

I would have never believed that a state would go bankrupt, but Rhode Island is on the list right behind Puerto Rico, no doubt.

Thank goodness someone is willing to run up the hill and tackle the political general of the corrupt Democratic army.

Steve Frias, best of luck to you! 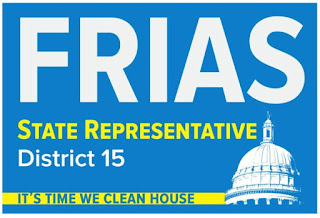