This news is beyond incredible.

Paul Chabot, conservative Republican running for Congress in the San Bernardino/Redlands area, has  emerged from a bruising primarym fighting off four Democrats, and came in second place.

Big name Republicans were backing another Republican--Sean Flynn--who turned out to be another Democrat and a total plant to skew the vote and resources away from Chabot.

Agui-LIAR has resorted to the same dirty Democratic tricks, and has alienated Democrats and Republicans with his self-serving votes.

By the way, I had lots of fun trolling him with my fellow members of We the People Rising

Even GotNews.com Charles Johnson was caught up in the dissimulation, if you will, and was attacking Chabot for ... being an expert on key issues relating to national security.

This just in--Chabot is already running even with the Democratic challenger in the Top Two general election!

SAN BERNARDINO - June 17, 2016 - Today, the Chabot for Congress campaign released a new poll showing the race for CA-31 in a dead heat at 43% to 43% with 14% undecided. The poll also shows terrorism being one of the top issues of concern to voters. San Bernardino is the largest city in this district. Chabot is a counter terrorism military officer with enterprise in the area of fighting ISIS and terrorism. In 2014 Chabot faced Democrat Pete Aguilar and narrowly lost despite being outspent 11 to 1. This upcoming matchup appears to be just as close with a slight edge to Chabot.

Chabot's Chief Strategist John Thomas stated, "It is no surprise this race is neck and neck. Voters are looking for an alternative to Pete Aguilar. They are frustrated that he's failed to destroy ISIS and bring good jobs to the region."

"Paul Chabot not only knows what it takes to fight terror, he's done it in Iraq. With resources, Chabot wins in November," continued Thomas.

Survey was conducted by Remington Research with a sample of 1091 likely General Election voters with a margin of error of +/- 3% with a 95% confidence level. 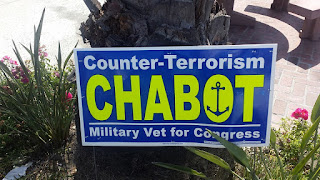 San Bernardino has the chance to take back their power and send to Washington a strong pro-life, pro-family warrior who will work with national security advisors to protect our rights, secure the borders, and safeguard the rights of the states and the people to protect and prosper themselves once again.