In a heated letter to La Opinion, Mayor Baru Sanchez of Cudahy claimed that the Los Angeles County DA's Public Integrity Division walked back their letter of rebuke for cutting off dissent, public comment, and criticism in city council meetings.


Here are his comments, loosely translated:

There are so many lies, where does one begin?

The Head Deputy Sean Hassett did indeed contact the city council in response to several violations of the Brown Act, complaints ranging from announcing last-minute special meetings to interrupting speakers during public comment.

The bigger lie was the argument that the "allegations may have been premature."

Contacts within the city were indeed concerned that the DA had backtracked on their reprimand for the corrupt ways of the city council. In my view, there was really nothing to worry about, since their repeated interruptions of the community in January and February meetings were videotaped and placed on YouTube for all to see!

There was no violation during public comments at meetings of the City Council, because any disruption that occurs during that stage where residents exercise their constitutional right to speak to your local government, the clock is stopped so as not to penalize whoever is speaking. The Brown Act does not penalize for interruptions during the stage of public expression. To all who come to express their comments are given enough time during their allotted time.

The letter to the district attorney did not question the interruptions if speakers deviate from the agenda topic. The truth is that they were repeatedly preventing people from criticizing the council, and they were intent on ensuring on holding meetings at inconvenient times so that no one would attend!

What the reporter does not indicate is that there are indeed some members of the public who have used this expression time to personally attack some councilors and thus disrupt the affairs of the city with the clear intention to completely stop the city government.

Lies! Lies! Lies! Residents in the city and activists who work with these residents do what the corruption, malfeasance, and lawlessness to cease. They want to see good governance, and will do everything in their power to make that happen.

For the record, the city councilmembers have no right

The city council is abusing the system.

Regarding Los Angeles, Sanchez may be referring to the lawyer who wrote racially charged messages to one of the city councilmembers.

While we in the City of Cudahy respect the right of free expression and the right to petition your government, we are also aware that the government should work for all and the simple act to continue driving city business should not be interrupted by a group of fanatics who only seek to completely stop the function of local government.

Once again--fanatics? Really?! I blasted them for using such abusive language to describe residents and citizens from outside of the city who were merely petitioning their government for better leadership and wise decisions!

So, is it true that the DA walked back their criticism of the city council for suppressing public comment?

I asked about this matter at the June 13th, 2016 city council meeting.

The city attorney, Rick Roybal-Olivarez, read the letter which they city had received from the DA's Public Integrity Head Deputy Sean Hassett. 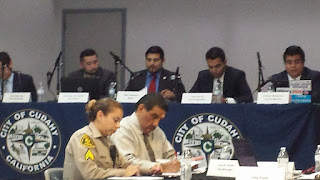 The city attorney and the city clerk released this letter to me the next day.

Here is the text of the letter:

We note that on each occasion, the city attorney interceded and allowed the council member to speak for three minutes, and correctly pointed out that all of the council members are allowed to express their opinions as to items on the agenda, or within the subject matter jurisdiction of the city, and need not limit their comments to "questions only." Accordingly, we find no violation of the Ralph M. Brown Act, and write only to express our agreement with the city attorney's position. Additionally, we would to make it clear that we express no opinion as to the content of any council member's speech; we support the right of all of the council members to express their opinions publicly regarding agenda items or issues relevant to their community.

We thank you for your courtesy and your continued cooperation in these matters.

This letter is dated May 20th, at least three months after the more severe letter rebuking the council for violating our First Amendment rights and the Brown Act.

Most likely, Councilman Jack Guerrero submitted this complaint, since the other members of the council have routinely interrupted and belittled him.

In summary, the DA's office did not walk back anything about their repeated violations of the Brown Act against the Public!

No wonder Baru Sanchez had nothing to pass onto the La Opinion reporter! What a telling outcome, too, that I received the letter after requesting it, but the press did not! Isn't that a violation of state law?!

He was pretending to talk about us, but really it was another matter entirely.

Check out my final comments to the city attorney before Cudahy's closed session on June 13th here.