Conservatives Making Waves in LA and All Over CA

Conservatives lament the Republican Party’s  -- and particularly the California Republican Party’s  -- lack of outreach into black and Hispanic communities. The previous history of slips and near misses gives us some insight as to why. When Republicans were not engaging in the circular firing squad torpedoing the candidates who don’t quite make it at Election Day, or shooting down one another because they were not winning (today, we are) the echo chamber would take over, and everyone wondered: “Hispanics care about faith and family, and so do African-Americans. Republicans care about all those things, too. Why are minority voters still voting Democrat?”

One Republican candidate in Torrance, CA -- an Armenian! --  pressured a group of likeminded partisans: “Did you ever bother meeting with them and asking for their vote?” One group of active conservatives, including California’s Representative to the National Federation of Republican Assemblies Johnnie Morgan and Torrance native Todd Blair (Go Balanced City!), decided to take on that challenge.

While the California Republican Assembly has endured hits and misses, one unit of “The Conscience of the Republican Party” has reopened in the most unlikely of places: South Los Angeles and Inglewood, now called the South LA, Inglewood Republican Assembly (SLAIRA for short). Their mission? Reaching out to black voters and supporting Republicans in these otherwise deeply Democratic regions to elected office. I first met the current President, Keith McCowen, after a difficult assembly run in the South LA region. He related to me that early on, he had been a Republican. “My mother showed me a picture from the 1800s. Two Klansmen were pointing their rifles at a black man in chains, and were telling him: ‘Vote Democrat’.”

Unlike too many African-Americans in our country, Keith – and a growing number of his friends, acquaintances, and political allies – remember and recognize that the Republican Party has been the party of abolition, free enterprise, suffrage, and limited government. This story has too few storytellers today, but that story is changing. LAIRA has worked with state senate and even local candidates. Wins are not forthcoming, yet, but cultural changes with the right group of diligent activists take time and the efforts are slowly paying off.

On October 18th, 2015, SLAIRA held their first luncheon at the Baldwin Halls Mall, specifically at the Museum of African-American Art. For the event’s festivities, the leadership identified their growing inroads into otherwise non-Republican areas, which has become all too much of Los Angeles proper. A necessary history lesson emerges. Let’s face the political facts: Los Angeles has been a Democratic stronghold from the Civil War, and even some secessionists staged their headquarters in the City of the Angels to take the Golden State away from the United States. The good news for California and the country began with another Democrat, who started to show his more “Republican side”. Opposed to slavery and supportive of the union, this Democrat -- Phineas Banning, the father of the Port of Los Angeles – seceded from the secessionist sentiment and helped equip pro-union forces. To this day, San Pedro and Wilmington, CA residents can visit Banning’s home and the Drum Barracks, which highlight Banning’ efforts to maintain our union.

After the Civil War, California Republicans, stressing their pro-freedom agenda, began winning statewide offices, and even claimed the governorship a number of times, along with strong showings in Congressional and local races. Over the last five decades, however, California Republicans had failed to adapt to the demographic changes, and thus lost legislative seats. Today, they are catching up, with stronger grassroots and better outreach. 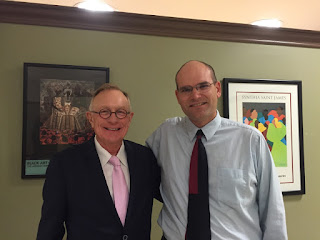 Which brings us back to SLAIRA and their first Annual Legislator Recognition Lunch Buffet. Out of about seventy-five people, nearly half were African-Americans. It was a nice change of pace, as a white person, to be the minority Republican for once. Mayor Suzanne Fuentes of El Segundo finally made contact with me (I wrote about her in a previous Townhall column). Republicans of diverse backgrounds throughout the Los Angeles area arrived to celebrate six California Republicans legislators. Those six received due recognition for their efforts promoting conservative values in Sacramento, one of the most hostile places in the country toward individual liberty, limited government, and constitutional rule. Two state senators, Mike Morrell or Rancho Cucamonga and Joel Anderson of El Cajon, drove all the way from their respective counties to attend. I was beyond impressed. My assemblyman, David Hadley, also attended, despite massive demands on his time, as well as the dubious honor of “Number One Target” for the Democratic Party in 2016.

California Republican National Committeeman Shawn Steel (pictured above with me) arrived on behalf of Congressman Dana Rohrabacher and Assemblywoman Young King of Fullerton, the first Asian-American to represent that district and one of the first Korean-American Republicans to sit in the state legislature. A staff member for Congressman Ed Royce (also of Fullerton) received awards on his behalf.

For many of my friends, their big celebrities are rock stars and Hollywood types. Sure, they make lots of money, but they don’t make a difference. For me, senators like Mike Morrell and Joel Anderson, who vote to protect our civil rights and property: those are my celebrities.  Earning a high CRA conservative rating of 90%, they stood up to the liberal Democratic Majority in Sacramento and said “No!” to more taxes and fees on hard-working but still struggling California residents.

Assemblymembers Hadley and Kim were recognized as the most promising legislators. And well they should be. Hadley, a freshman in the minority party, worked across the aisle to pass school choice for military families, from a state legislature dominated by the anti-choice California Teachers Association, signed by Governor Jerry Brown. Impressive, and SLAIRA, a new unit raising Republican profiles with black communities, reward their work.

With better outreach to minority communities, California conservatives are winning again, working hard, one election and voter at a time, to turn the Golden State from a barren hue of a blue back to a roaring sea of red.
Posted by Arthur Christopher Schaper at 11:00 PM