Ohio Governor John Kasich is sending out his own eblasts to registered, well-connected Republicans throughout the country, too.

He engages in this outreach despite his spiteful overreach in the latest debate. Viewer polling listed him dead last in a number of rankings. His overpreaching arrogance on expanding the government as a Christian service is grating on people.

I concur with one Watchdog.org article, which contends that a Kasich nomination for the Republican Party will doom efforts to repeal Obamacare. Why? Kasich has touted the program as a model means for improving the health and wellbeing of marginalized Americans: elderly, infirm, mentally ill, homeless, foster children, etc.

Hillary Clinton would be an extension, and exacerbation of Obama. On too many fronts, however, so would John Kasich.

Here are the contents of Kasich's latest eblast: 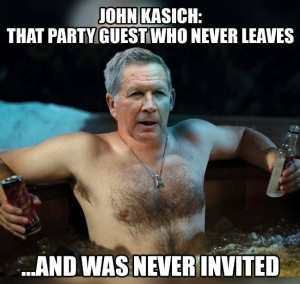 Arthur,
Hillary Clinton unveiled her ISIS strategy last week. Simply put, it’s a continuation of the Obama policies and if we elect Hillary, America will continue to lead from behind.

Talk about hypocrisy. Kasich wants to continue much of Obama's domestic policies, including Common Core, amnesty for illegal aliens, as well as Obamacare.
Arthur, we cannot allow this to happen. I need your help right now.

This country cannot take four or eight more years of Obama-rama. For that reason, I will not help Kasich.
I released my own national security proposal recently and it involves leading a coalition of nations to put boots on the ground and wipe out ISIS. I first called for this back in February as it was clear that ISIS was only growing stronger every day we sat on the sidelines.

National security is one of the chief responsibilities of the Chief Executive. No one disputes that. The problems arise when a presidential candidate calls for stronger arms, yet wants to fund and expand inordinate, unsustainable government programs at home, too.
The stakes in this election are far too high to elect somebody who cannot lead! Please chip in $10, $25, $50 or more right now to help us get this message out.
I have eighteen years of experience on the Armed Services Committee and as an executive of the nation’s 7th largest state, I’ve had to make the tough decisions that give me the executive experience President Obama never had.

Tough decisions include turning down big government bribes from Washington. Kasich failed that test.
Arthur, I need you on the team. Let’s win and go on to make America safer together.
Thank you.
John Kasich
Governor of Ohio & Presidential Candidate
P.S. We can't win the White House without winning Ohio. I won reelection as Governor with 64% percent of the vote and will defeat Hillary in Ohio. Chip in now.

Baloney. Mitt Romney won Massachusetts in 2002 as governor, but lost the state by double-digits in 2012. Statewide elections differ considerably from national elections on many metrics. New Jersey Democrats had no problem reelecting Chris Christie in 2013, but admitted while casting their ballot that they would never vote for him to be President.

John Kasich has embraced too much Big Government to make him a primary choice in the Election 2016 Presidential primaries. Democrats and liberals in general like Kasich, but those affinities are further proof why Republican voters, primary or general, should reject as a DOA Presidential candidate ASAP.

He likes Common Core. He loves Obamacare. He wants amnesty for eleven million (probably more) illegal aliens, all while the very poor and marginalized Americans he claims to care for - still need care.

Sorry, Johnny, but you are too much like Obama for my taste. This country endured eight years of "compassionate" conservatism under George W. Bush. Eight more years of relentless progressive policies have made matters worse. Kasich is Obama on so many policy issues, and should not be standing on a stage debating Republican candidates for the nomination.

Posted by Arthur Christopher Schaper at 12:14 AM