I came into the meeting with some lower expectations, because I was hoping that all of us fighting against the corrupt city council would spring a nice surprise on them. 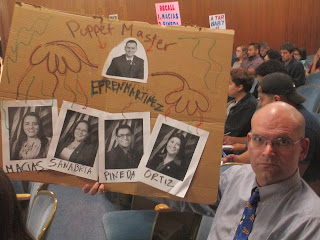 Despite my initial disappoint before the meeting, everything ended up working out quite well. All the activists who  have been working these city councils have told me: we have to be patient. We want to have the  most effect in everything that we do.

Taking our time has worked out for us. The city council thought that we would be gone by now. One of the residents in the city informed me how fearful the rogues have become, since we have not stopped showing up.

At the latest meeting, we all dressed down the city council for violating our rights as well as federal and state law. With the affirmation and support of the Los Angeles County District Attorney's office, the council was on high alert and did not threaten to remove us for speaking out in favor of speakers' comments to the body.

At the end of the meeting, I confronted planning commissioner Efren "Chucky Cheese" Martinez, the former campaign manager and now puppet master of the four city councilmembers who appointed the two illegals to city commissions.

I demanded answers from him about how he was paying off the rogue councilmembers, He kept trying to change the subject, then retreated back to his purported service for this country. "I  served ten years," he replied. "In jail?" I quipped. Dr. Newman found that joke particularly funny.

We followed him to the parking lot behind the city hall. Linda Caraballo, former city councilmember, shouted "Shame! Shame!" and the rest of us followed suit.

The political machine chicanery in that city are getting more scared by the minute.

Even the local newspaper printed a picture of me with the poster exposing the Puppet Master and the puppet city councilmembers.

We the People Rising have risen to the occasion and are fighting back. More Huntington Park residents are joining us, and the political class in that town is terrified.
Posted by Arthur Christopher Schaper at 12:44 PM