To the NRSC: No $$$ Until you #DitchMitch

I have received three letters from the National Republican Senatorial Committee, each of which signed at the bottom from the Chairman, Roger Wicker of Mississippi.

The letters keep claiming that I pledged $25.00 to help the committee elected Republicans to the US Senate and further establish their numbers in the upper chamber.

Since the Republicans took back the US Senate in 2014, the first time in nearly a decade, conservatives have witnessed the Majority Leader Mitch McConnell continue the same agenda. The Democrats end up passing much of the legislation in the US Senate, with a few of the Republicans jumping along.

McConnell is not leading, but caving, cowering, and following. Instead of taking orders from We the People, the senior senator is doing what the Chamber of Commerce wants, and the well-monied special interests in Washington whose concerns do not mesh but rather clash with the US Constitution, the states, and the people.

Instead of leading, he is pleading, and prodding along with the Democratic agenda, not passing any key legislation or fulfilling the promises pledged on the campaign trail.

So, after I received the third letter in a month from the NRSC asking for "my pledge," I wrote the following: 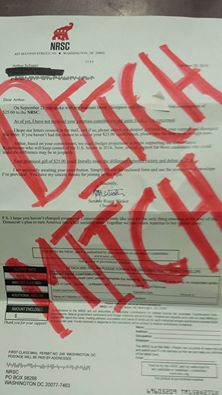 I advise every American, every conservative, to send the same message to Washington, to the US Senate, and to "Democratic" Majority Leader Mitch McConnell.
Posted by Arthur Christopher Schaper at 11:29 PM