Los Angeles Times Fail: CA GOP Not Sitting Out Anything

The Los Angeles Times does not hide its illiberal bias any more.

Just look at this headline:

I spoke with a Torrance, CA resident about this headline.

He actually believed that the California Republican Party was giving up on the US Senate race.

This article was talking about Senate District Five, in Northern California, specifically the Modesto region.
How biased, slanted, and misleading can one get?

Here is one more take on the same "headline:"

Which Republican Party is giving up or sitting out a senate race?

This headline was misleading and shameful all at the same time.

I spoke with Chairman Jim Brulte, and he affirmed that the state party will invest all the resources available - and made available -- for all races. 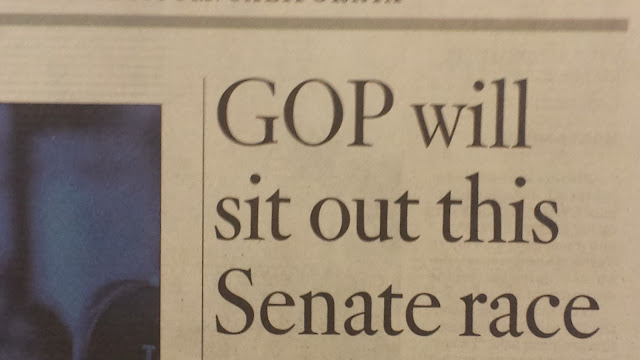 Outgoing Assembly minority leader Kristin Olsen acknowledged that the state party will not be investing resources immediately in the race. There are a lot of competitive races where candidates are not waiting for the state party to help them.

It;s all about the grassroots, people. Republicans are learning this lesson. Democrats will find themselves at a distinct disadvantage once they lose major union money, because of the last three decades the liberal-socialist Democrats have coasted on the compulsive funding streams of labor unions.

Without grassroots efforts, without individual outreach, Democrats won't have much of a chance in the future.

While the Los Angeles Times gives the impression that Republicans are running away from competitive seats, the fact is that Republican coalitions -- plural! -- are popping up all over.

The California Republican Party is not sitting out anything, because the party is not based on a few masterminds in Sacramento, but the working efforts of grassroots conservatives all over the state.