With Matt Bevin's win in Kentucky, Workplace fairness and equity will have another ally in the Bluegrass state.

The efforts of the National Right to Work Foundation cannot be understated.

They have lobbied local and state government for years to represent the freedom and rights of all workers, giving them the choice whether to join a union or not, and whether those unions dues which they pay -- if they pay them at all -- should go toward political campaigns are charities.

West Virginia is going Republican, right under national Democrats' noses, and the right-to-work movement is on the rise there, too.

Unions cannot fight every fight in every state. Their major loss in Wisconsin signaled that the slow and painful demise of their undue political influence. Now that Wisconsin is right-to-work, unions public and private are losing their inordinate influence. 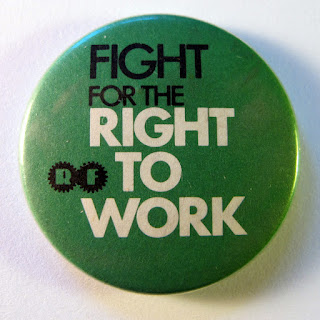 After Wisconsin, where will right-to-work alight next?

Missouri tried to go right-to-work, but the GOP supermajority could not quite make the cut off following the Democratic Governor's veto. With a Republican Governor in Missouri next year, RTW will win.

Colorado and Montana are purple to red states, and a new governor or stronger conservative majorities in the states will usher in RTW, too. In New Mexico, if the state senate flips to GOP control, RTW will emerge there, too.

Prediction: three more states will be RTW by the end of 2016.
Posted by Arthur Christopher Schaper at 2:44 PM