RIP Anne Heche, and Why Her Story Matters

On August 5th, 2022, she was driving 90 mph in a Mar Vista residential section. She crashed into a home, and both her car and the home went up in flames.

She was presumably high on cocaine, dealing with other controlled substances. She did survive the crash, and she was conscious when the fire department rescued her from her car then stabilized her at the nearest hospital.

She then lapsed into a coma, only surviving by remaining on life support. The family wanted to make sure that her organs could be donated to save other lives. Then they pulled the plug.

Why does her life matter to me specifically?

I first learned about her from her open lesbian relationship with Ellen Degeneres in the late 1990s. 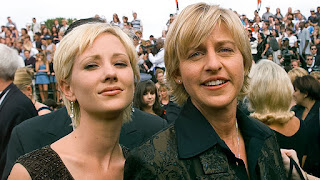 Degeneres had lost her eponymous TV show after coming out, but she was still out and about with the Hollywood glitterate. At that time, the corporate media was determined to jam the normalization of homosexuality (and later transgenderism) on the public.

But then Anne Heche had a mental breakdown, then soughy psychiatric help. The police had even saved her from an overdose following her split from Ellen.

What happened after her falling out with Ellen was her falling in love with a man, getting married, and having children afterwards!

Anne Heche proved right away that people do change. She was a vivid, evident example to me and anyone else paying attention at the time that people are not "born gay," that they do change.

Later on, stories about her horrific childhood came out. Marca reports:

Anne Heche's dark family history is arguably the main reason she struggled with mental health issues and will eventually pass away after last Friday's car crash. In the podcast clip we shared with you, you can tell she was a person who constantly struggled to have a good day and all of that originates from her parents. Heche's memoir, 'Call Me Crazy' talks about the actress suffering sexual abuse from her father when she was a child.

But that is only the tip of the giant iceberg of family drama that the actress had to go through. From an early age, she was raped by her father before he became one of the first people in America to be diagnosed with AIDS. Donald Heche was secretly living a wild life as a homosexual and eventually way from pathe virus in 1983. Heche was 14 at the time.

Heche would talk about the incredible, indescribable abuse she endured in her youth, which traumatized her for the rest of her life. We find her further proof of the emotional, mental, and sexual harm which induces individuals to seek solace and intimacy in same-sex relationships. I have long asserted, and Heche's life provides more proof, that homosexuality is a result of trauma, neglect, abuse, confusion, or molestation. There was so much of all of this in Anne Heche's life.

And yet for all of that, she did get married and have children, too.

Why does Anne Heche matter to me? Her life proved that people are not "born that way," and that homosexual leanings are the result of these tragic circumstances and the wrong believing which they engender in individuals. Her story needs to be told, and it is so sad that her life ended so tragically.