Trump Supporter Meets with Me in West Valley

I have to say, things are getting rougher for LA County for Trump members.

Even if Congress has stalled on enacting key reforms, President Trump has continued to power through with clear-cut executive orders to reduce the regulatory burdens of the Obama Administration on the American People.

Not only that, but his crackdown on illegal immigration is gratifying concerned citizens across the country.

In Los Angeles County in particular, and throughout the state of California, Trump has millions of supporters, yet the rabid Democratic dominance in this state will stop at nothing to stop him. His most ardent supporters in elected office and on the street have become more hostile, more violent, and they hope to intimidate Trump supporters to disappear or go underground.

I am glad for the brave examples set by Latinos for Trump Marco Gutierrez, Raul Rodriguez, and many others. I have also decided that no matter where I go, I am going to wear my pride for my President without reserve.

West Valley, Los Angeles is not exactly the safest of safe spaces for Trump supporters, but I did not care. I went to Reseda early before the Xavier Becerra town hall because I knew that getting there early would help me avoid terrible traffic.

At a local McDonald's I walked in ready to sit and write, fully Trumped Up!

A guy named Anthony saw me, and he was glad to meet me. "Wow! That's cool! May I take a photo? My friend would love this."

Here's the photo he took: 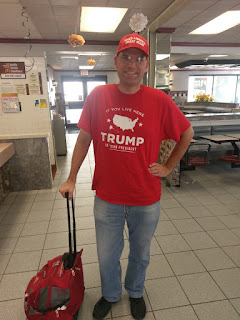 I then learned from Anthony that he had been a Democrat for a long time, but a conservative friend of his worked with him and talked with him, and he supported Trump afterwards.

This is great news all around.

Check out the photo I took with him afterwards: 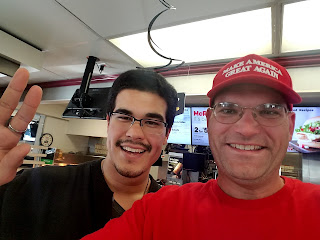 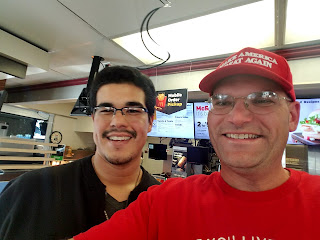 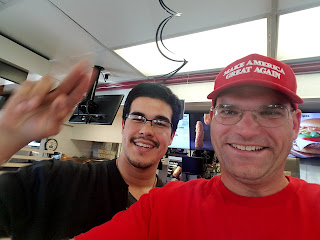 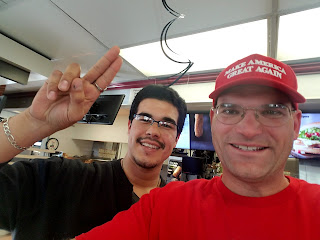 This was an incredible meeting.

I have to say that I walk into some sections of Los Angeles with a little bit of trepidation. Even my own home city of Torrance, I have had people say some bad things to me. Over all, though, people have become much more positive about President Trump.

How can anyone complain? After all, his roll-back of government overreach and intervention has allowed the economy to boom like never before. Even in California, jobs are coming back and small business owners know that they have a business champion in the White House. Let's not forget that illegal and even legal immigration is down, which ensures that American workers have a better chance at not only getting a job but also enjoying higher wages across the board.

In the West Valley region, I have actually met Democrats who voted for Donald Trump! They are older, of Jewish descent, and they wanted a strong Commander in Chief who would protect their rights.

Moreover, they wanted a leader who would crack down on--you guess it--illegal immigration. This sore subject has become a particularly keen point of dissension in the West Valley section of Los Angeles.

Once again, I am really glad that I went into this local McDonald's wearing everything Trump, because it inspired Anthony to know that he is not along in Los Angeles!
Posted by Arthur Christopher Schaper at 3:46 AM