More WINNING! Trump Breaks Olbermann and Scarborough in ONE DAY!

The winning never ends for us Trump supporters.

I had read a tweet released from the GOP Twitter handle, but I found it too good to be true.

The first piece of social media news asserted that Republican in Name Only Joe Scarborough was deleting all his anti-Trump tweets.

Why would he do that? Probably because the bad press and publicity is killing his chances at keeping any kind of strong ratings push. It's not a good idea to keep shaming President Trump and keep claiming that you are some kind of conservative.

Then the better news: Keith Olbermann, the anti-Trump, anti-American hating, self-loathing leftists who got fired from ESPN and/or MSNBC has announced that he will not engage in any more political commentary.

Yes, he said that, he announced that, and he has stood by that admission on social media.

Check out the reports from both media pygmies below: 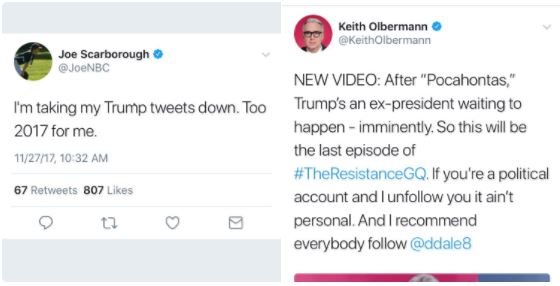 NEW VIDEO: After “Pocahontas,” Trump’s an ex-president waiting to happen - imminently. So this will be the last episode of #TheResistanceGQ. If you’re a political account and I unfollow you it ain’t personal. And I recommend everybody follow @ddale8 pic.twitter.com/NzguN6uvL3
— Keith Olbermann (@KeithOlbermann) November 27, 2017


I didn't know that Christmas was starting so early this year!

What is going on, though, with these passive admissions and retreats?

Scarborough  recognizes that whatever media power he claimed to wield has been wiped away for good. For an establishment GOP who wanted to drain the swamp as a youngster, he found that commenting on the swamp could be more lucrative, I suppose. The truth is, though, no matter how much media power someone commands, there is nothing better than getting into the fight on the ground and making a difference.

Media presence is nice, and making money while doing so is great, too.  Yet I imagine that many Republicans who had entered Washington DC with high hopes, only to leave with hopes dashed, feel a twinge of jealousy that Trump has gotten more done in 11 months than they could get done through the four-year Gingrich Revolution from 1995-1999.

As for Keith Olbermann, he has learned the harsh yet necessary truth that ... no one cared what he thinks! How that must bruise the egos of the talking head liberals who think that everything they think and touch is just wonderful.

Then again, it's possible that Olbermann will be facing some misconduct allegations in the near future. Perhaps the fact that he was a shoddy political commentator for a shoddy magazine (GQ) signaled that the whole enterprise is heading south.

Need I remind the readers that GQ considered anti-American football player Colin Kaepernick the Man of the Year? That says it all, doesn't it?

There is so much winning! I cannot believe this is happening! Olbermann was the Worst Man in the World every day that he broadcasted his anti-conservative drek, and finally the New Media and the New Right has put him out of business.

Joe Scarborough won't last much longer, either, no doubt! 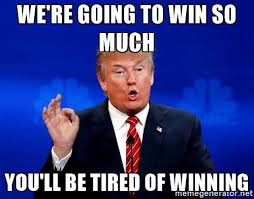