I could not pass up learning about elected county sheriffs in the state of California who not only opposed SB 54, the Sanctuary State Bill, but went out of their ways to stop it. They wanted to ensure that it would not pass, and to ensure that public safety, not dangerous virtue signaling, remained the order of the day.

Most California sheriffs fiercely opposed the 'sanctuary state' law. Soon they'll have to implement it

Two years ago, as others in California were limiting cooperation with federal immigration agents, the Fresno County Sheriff’s Department welcomed them into its jail.

God bless the Sheriff of Fresno County. Deport all illegals! 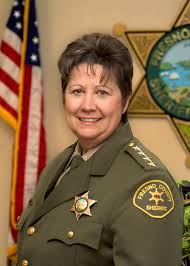 Sheriff Margaret Mims gave U.S. Immigration and Customs Enforcement unrestricted access to databases and private rooms to interview inmates. She reorganized release times so agents could easily pick up people who had served their sentences.

That's what I'm talking about!

The policy sparked outrage among immigrant rights groups, who called it a pipeline from incarceration to immigrant detention, one that they said disproportionately and unfairly affects Latinos.

"Immigrants rights"? That is a lie. These agitating left-wing groups do not care about the rule of law, and they do not care about immigrants. The term itself implies people who have come legally into this country, not men and women who jumped the line with their children, skirting our nation's laws and our sovereignty. Very offensive, and journalistic malpractice.

“We are not anti-immigrant for working with ICE,” Mims said in defense of the approach. “We are anti-criminal activity.”

That belief is held by many of California’s 58 county sheriffs who will be on the front lines of implementing the landmark “sanctuary state” law, which Gov. Jerry Brown signed last month. It takes effect on Jan. 1.

Fascinating, isn't it, how this report ignores the Los Angeles County sheriff. What a shame. Jim McDonnell made a political calculation, and it was in the best interests of every resident in the county.

Senate Bill 54 was introduced as a sharp rebuke from Democrats to President Trump’s call for more deportations. It is designed to limit the people that California law enforcement agencies can detain, question or investigate at the request of federal immigration officials. But its impact will largely rely on county sheriffs whose departments play a vital role in immigration enforcement — and most of whom, like Mims, were opposed to SB 54.

This paragraph sets the arrogant, hateful tone of the Democratic dominance in Sacramento. When they are not abusing women and forcing them to submit to abuse, they are undermining the rights of the California citizenry while promoting lawlessness and their corrupt, political agenda.

I have never been so disgusted with California's elected leaders as I am now.

Fresno County Sheriff Margaret Mims is one of many county sheriffs opposed to the "sanctuary state" law that will soon be implemented.

The passive voice construction suggests that Sheriff Mims may ignore the law. She has every right to do so, since federal law TRUMPS state law. The Supremacy Clause in Article VI, Section 2 outlines clearly that the United States Constitution is the Supreme Law of the land. It does not bend or weave to states or local jurisdictions which think that they can pick and choose which laws they regard and comply with.

As keepers of jails across the state, sheriffs will retain control over who has access to the citizenship status of hundreds of thousands of people booked into their facilities every day. As elected officials, many represent conservative or rural areas, where voters might be more likely to oppose the new state law.

In fact, 80% of voters oppose sanctuary cities in the state of California. The rule of law, law and order must be respected at every level, at every angle. There can be no compromise on these fundamental concerns. 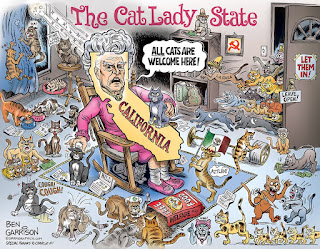 Sheriffs could also be subject to direct attacks from the Trump administration, which has threatened to slash federal funds from “sanctuary cities,” jurisdictions where local officials have passed ordinances and regulations limiting interactions between law enforcement and immigration agencies.

Again, it would be in the best interests of county sheriffs to ignore the state law and comply with federal law. They will get more funding from the feds, while the state legislature can cut what little funding they have left and it won't effect law enforcement in the several counties throughout California.

Trump built much of his campaign on anti-immigrant sentiment, showcasing the relatives of people killed by immigrants in the country illegally. His appointees have suggested illegal immigration is tied to increases in violent crime, though studies show immigrants generally commit fewer crimes than U.S. citizens.

Another media smear. "Anti-immigrant" sentiment is simply not true. I know a number of immigrants who voted for President Trump. They want America to be great again, and they refuse to allow any rampant lawlessness undermine the American Dream which they sought at all costs.

U.S. Atty. Gen. Jeff Sessions has called SB 54 “unconscionable.” Thomas Homan, the president’s ICE director, has said his agency “would have no choice but to conduct at-large arrests in local neighborhoods and at work sites," prompting some in California's congressional delegation to request a meeting with Homan over his “reprehensible” comments.

SB 54 would never have stopped ICE from coming into the state of California. They are federal agents committed to enforcing federal immigration laws. There is no way that they could have gotten away with attempting to frustrate their efforts

In an opposition letter penned in March, Orange County Sheriff Sandra Hutchens saw the conflict coming, saying SB 54 would put sheriffs like her in “an unenviable position.”

Though Trump has added new fuel to the debate, clashes between sheriffs and lawmakers over immigration enforcement have long existed in California, where previous legislative efforts to protect more than 2.3 million people living here illegally have sought to disentangle state and local law enforcement and federal immigration forces.

There are 2.3 million illegal aliens in California?

Unbelievable! It's time to deport all illegals, and it's to put American sovereignty first!

Officially dubbed the “California Values Act,” it will largely prohibit state and local law enforcement agencies from using personnel or funding to hold, question or share information about people with federal immigration agents unless they have been convicted of one or more offenses listed in the Trust Act.

Some sheriffs said the new law is unlikely to change the day-to-day work of deputies, who don’t question victims or witnesses about their immigration status while on patrol.

But unlike some city and campus police chiefs who threw their support behind SB 54, at least 40 of the 58 sheriffs in the state remained staunch opponents of the legislation through its passage. At least two — Jim McDonnell of Los Angeles County and Scott Jones of Sacramento County — drew protests for lobbying against it.

Now, they will be tasked with crafting new policies and training officers to limit their communication with ICE. Their agencies will also have to gather new statistics on the arrests made by task forces and on the people they transfer to immigration officials, reporting requirements under the law that are designed to provide insight into who is being swept up in the federal immigration dragnet.

Until now, counties have taken various positions when it comes to cooperation with ICE.

In San Francisco, for example, County Sheriff Vicki Hennessy filed a declaration in support of the city in its lawsuit against the Trump administration’s crackdown on “sanctuary city” policies. In accordance with the city’s laws, she wrote, the department maintains policies that limit notifying immigration officials on inmates’ release dates.

But in Orange County, Hutchens has a $7.27-million contract to incarcerate immigrant detainees convicted of crimes, as well as a $22-million annual lease to provide ICE with jail beds. Other sheriffs have granted federal immigration agents assistance behind the scenes. In L.A., McDonnell allowed them to set up an office with computers that provided information on released prisoners, according to a report released last month by an independent inspector.

The Los Angeles Times focused on Fresno County in part because the Sheriff had been a Democrat,  then shifted to become a Republican. They also focused in on the fundraiser with Sheriff Joe Arpaio earlier this year. What is all of this nonsense?

The Times wants to make the safety and security of California citizenry a political issue. That's wrong. They refused to include any comments from the Los Angeles County Sheriff, how illegal aliens are committing a growing number of the crimes in the county.

Why does this go unreported?

Let's talk about the Sheriff of El Dorado County, who explicitly declared before the passage of SB 54 in its final form that he would not comply with the sanctuary state provisions. We need more leadership like that in the state of California. Even though Steve Bannon mentioned that California is placing itself in the same position as South Carolina in the 1830s and the 1860s, historians sometimes forget that within the rebellious cities and states were constituencies which in turn rebelled against the rebellion within and refused to be silenced, bullied, or pushed aside.

During the American Civil War, West Virginia became a new state because they refused to secede with the rest of the Old Dominion. Eastern Tennessee almost left, and there were cities in Louisiana which declared themselves free cities from the Confederacy. 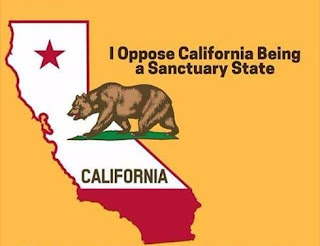 I say God Bless every County Sheriff who refuses to comply with the unjust, unconstitutional Sanctuary State statute. It is beyond unconscionable! Put Americans first, of all backgrounds, and ensure the rule of law!