Now this is a stunning yet disturbing reality.

News will always be fake, or it will tend toward accomdating the powers that be rather than challenging them.

Julian Assange sums it up perfectly:


This statement is quite profound in its simplicity. How could we not recognize this?

But the bigger question becomes -- how do we get around this problem?

Allow for more competition among the different news agencies? 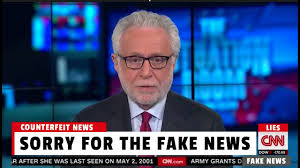 How about ensuring that more individuals can report whatever they can to be effective?

The whole concept of print, media and reporting cannot be divorced from some of revenue. Why are we going out of our way to allow a couple of well-connected cronies deciding what gets printed and what does not?

What has happened is that a few well-connected individuals, liberal and left-wing, took over the reins of communication.

Now they feel the reins slipping out of their hands, and there is nothing they can do about it.

Thank God for Trump, who helped usher in a new media (press, social media etc) and new media (plural of medium) to get the word out against everyone and everything that is trying to block us and stop us!