Who didn't see this coming?

The socialists in California and throughout the rest of the country who know that socialism kills, that these governments end up running out of other people's money.

Venezuela is a total third-world dump now, where the inhabitants have to abandon their children, chase wild animals to find food, and even the children have restored to selling their bodies in the slave trade in order to get food.

This is not a game, people. Socialism is evil, an ideology of greed and envy which enriches the corrupt few and impoverishes everyone else.

Please, we need to confront the folly of the college students and the mass media frenzies which stil want to sing the praises of socialism and the command-control economic agenda. 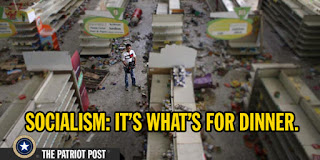 Milton Friedman once joked that if you put the government in charge of the Sahara Desert in five years there would be a shortage of sand. He could have been talking about Venezuela and its oil wealth. But it is no joke.

Indeed, even natural resources are spent, wasted up, and put to no other use than allowing a couple of corrupt kleptocrats rule at the expense of everyone else.

On Monday Caracas missed interest payments due on two government bonds and one bond issued by the state-owned oil monopoly known by its Spanish initials PdVSA. Venezuela owed creditors $280 million, which it couldn’t manage even after a 30-day grace period.

OUCH! The bills have come due, and now the creditors are coming home to roost.

What happened to the workers' paradise that Hugo Chavez and Nicolas Maduro had promised?

Venezuela is broke, which takes some doing. For much of the second half of the 20th century, a gusher of oil exports made dollars abundant in Venezuela and the country imported the finest of everything. There were rough patches in the 1980s and 1990s, but by 2001 Venezuela was the richest country in South America.

How about that? This country was on the up and up. One Venezuelan told me that his home country was considered the Switzerland of Latin America. Not a perfect country, but one that was working harder and getting closer to secure First World status.

Did you read the above paragraph for yourself?

The bank had "too much money"? Where have we heard similar rhetoric? (Hint, the previous President of the United States). The truth is that Hugo Chavez stole money from this bank for ... whom?

Falling oil prices are partly to blame, but the main problem is that chavismo has strangled entrepreneurship. Faced with expropriation, hyperinflation, price controls and rampant corruption, human and monetary capital has fled Venezuela.

Yes, everyone who works for a living and invests in business to raise money--took their money, their capital, their smarts, their capacities and ran for other countries.

As of Tuesday evening, the Investment Swaps and Derivatives Association still had not declared Venezuela in default. That matters because this will trigger the insurance obligations inherent in the credit default swaps. But S&P Global Ratings declared the country in default Monday. On Tuesday morning the Luxembourg Stock Exchange issued a suspension notice for the bonds with missed payments.

President Nicolás Maduro has formed a commission to restructure up to $150 billion of the debt and put Vice President Tareck El Aissami —who is under U.S. sanctions for drug trafficking—in charge. Mr. El Aissami called a meeting of creditors on Monday in Caracas, which most bondholders did not attend. Press reports said Mr. El Aissami delivered a monologue on Venezuela’s intention to pay and took no questions. He argued that Trump Administration sanctions make it difficult for the dictatorship to arrange refinancing.

Brilliant: when your country is struggling through funding and finance issues, the best thing to do is hire drug taffickers to fix the problem. Yes, that will solve everything, Maduro. Sure.

The real problem is that restructuring assumes the country can grow again. That’s nearly impossible without a change in policy that will free the economy.

"FREE" the economy. How about that! Freedom is the way to go!

If Caracas doesn’t find a way to settle with bondholders, they will soon ask authorities to seize Venezuelan assets such as oil shipments at sea and Citgo facilities in the U.S. Such are the wages socialism. 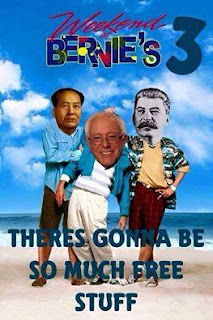 It does not work. Never has, and never will. Yet one of the most ludicrous arguments I heard about socialism rested on the argument that Venezuela is not a truly socialist country. He claimed that the nationalization of businesses is not socialism. That is not true!

Nationalization is a part of the whole socialist enterprise. It's that simple. Government control of the economy is a dead-end for any growth, and it hurts workers and their families far more than the socialist adherents claim.

It's time to wake everyone up to this insanity. Men and women of all ages are captivated with the idea of equality for everyone. However, the drive for equality of results just spreads the poverty while eliminating the chances for wealth from nearly everyone in any given society.