Insanity: LAPD and DHS Police Stood Down in Face of Crimes

Last night, members of We the People Rising with me counter-protested a rally to save the Temporary Protective Status program. They decided to hold a candle-light vigil to mourn the loss of the program. 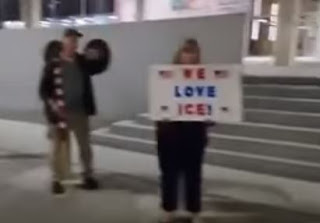 This abuse of our good will has to stop.

The Temporary Protective Status (TPS) program is supposed to be (what for it) temporary.

Yet the program has been notoriously abused, with "refugees" staying in the United States for 20 years minimum.

So, this National TPS Alliance decided to gather outside.

What were they hoping to accomplish?

At any rate, We the People Rising stood our ground outside, intending at all costs to show our support for American citizens, President Trump, and the "America First" agenda.

Now, here's where things went from bad to worse ...

At this time stamp, members of The National TPS Alliance stole my posters and started destroying them. 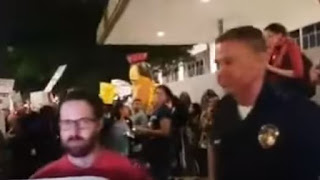 And he did nothing about it!

I could not withhold my outrage. I let him have it repeatedly, all while drowning out the protesters who wanted to crow and sing about "justice." Really? Destroying private property in front of a federal building, and they want to sing, dance, and chant about justice.

Earlier in the evening, I saw an illegal alien wearing a T-shirt that read "I am undocumented", as though that moniker remains something to be proud of. I was sickened by such brazen, arrogant lawlessness. I even begged him to tell me whether he would wear a shirt with a picture of Ruben Morfin or Kate Steinle. They were dreamers, too, and their dreams were cut short because of illegal aliens.

Where's the justice for them? That young man wearing the T-shirt tried to hide it, then I called him out on it, and he showed his shirt again for the world. Finally, he and the man interviewing him moved down the street.

Unbelievable. Illegal aliens and their enablers group together and chant for the world to see. They are brazenly endorsing, aiding, and abetting lawlessness, but when someone commits a crime against me, nothing happens.

I refused to be quiet, but bellowed on megaphone the entire time.

Keenan was getting redder and redder by the second. Robin Hvidston and Gary Gileno also lined up next to me to record the Sergeant.

I cannot believe what was happening! They refused to do anything about it. Soon, the TPS vigil moved down the street, and then I confronted the Sergeant face to face. He tried to make it my fault, but I refused to let him get away with it. At first, he had said to me that he didn't see "her" do it. What?! The default pronoun is always "he", so he DID see it!

Again, the Sergeant wanted to blame me for their crime. "You were creating an environment" ... I does not matter what I may or may not have done. He then argued that it would have made the situation far worse if he had arrested the woman who had taken and ripped up my signs. He even tried to back away from responsibility by claiming that there was no way of knowing whether they were my signs or not.

LIE! I announced at great length that those signs were MY SIGNS!

Incredible! I learned long ago that when it comes to ensuring justice, that you must not let up. You keep shouting, you keep demanding justice at all costs.

Finally, after the TPS group moved down the street, he asked me "do you want me to have her arrested?" I said "yes!" of course. They were not sure what to think. One person told me that he was hoping that I would simply say "No". Not going to happen.

There must be justice in the land. Keenan walks down the street and goes to the vigil meeting on the other side of the building. He then returns with one of the pastoral (?) leaders. He came to apologize and offer restitution for what happened. "I am doing this out of the goodness of my heart." Blah, blah, blah. I have never seen such a widespread corruption of the Gospel, the calling of the church, and the ministry. Pastors and preachers are aiding and abetting lawlessness! They want to protect illegal aliens, but they refuse to respect the laws of this land, and they want to ignore the manifold risks to life, safety, and property to American citizens because of illegal aliens.

This is the height of evil. It's wrong!

The pastor wanted to pay me for the signs. He offered my $20. That's not justice. I worked very hard on those signs. That is time and energy out of my day to put signs together. Raul explained the time and energy he puts into his signs. The pastor then wanted to negotiate down the concerns and costs of the signs, as if he was in the position to negotiate with me! The arrogance is beyond stifling.

I told him flatly: "Make it $40!" I refused to budge, but he got really upset about that and refused to go that high. I have learned long and hard that when someone had done wrong, they are not in the position to dictate consequences. Because I refused to relent. The pastor just gave up and gave me $40--but I still demanded a police report.

That was taken care of.

While we were waiting for Sergeant Keenan to look for the suspect, another Latino bigot grabbed at Gary Grindall61's Gileno's camera. 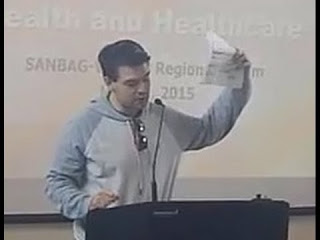 And right there on the steps of the Roybal Federal Building was a federal DHS officer. He just stood there and watched the crime occur--but did nothing about it.

We went after him for about fifteen minutes demanding that he go after the culprit who had grabbed at Gary's camera. Nothing. To ensure that we got a good picture of him, we shined a light at him so that we could see and expose him clearly. I asked for his name and his badge number. His common retort was "You can see it." No, that is not an answer.

He is required to release to us his badge number. I am fully aware of this because another federal agent had released it to me after Gary Gileno was unjustly arrested at the Pasadena Federal Courthouse in early August.


This is insane. Gary gets arrested just for exercising his First Amendment Rights per the public transparency Brown Act in the state of California. Illegal aliens and their enablers destroy my property and grab at his camera, and there is no consequence. The police do nothing!

I want this information going out as far as possible. These are the actions of fearful police officers in sanctuary cities who are preoccupied with political correctness, all due to their superiors. 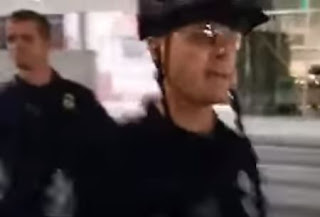 Finally, after badgering the DHS official, I got an answer: His name is J. Haig, and his badge number is #943.

The lack of enforcement against illegal aliens and their enablers is beyond disgusting. What is the point of having these officers on the ground or supervising an First Amendment protest when they refuse to enforce the laws of the very country and city where they serve? Are these officers just showing up to do the bare minimum, and hoping for an easy retirement with a fat pension paid for by all of us?

This is wrong, and we are not going to tolerate any of this.