I am beginning to suspect that part of the reason why Lyin' Ted did this was that a national ordinance forbids recording and demonstrating on federal property. Unbelievable, but true. Fortunately, we refused to back down but showed up with our signs, posters, and bullhorns to protest Ted Lieu.

It's really a shame that this corrupt, arrogant leftist spends more time going after President Trump and lies about the country and its values. He undermines the very principles which he claims to care about.

Still, LA County for Trump attended the Veterans town hall, where we showed utmost respect to the men and women in uniform who served our country, whose service still demonstrates considerable honor to this day.

I noticed that some of the veterans were determined to make political points. One lady talked about the lack of quality care at the VA for veterans. I could not agree more, but the answer by no means is single-payer socialized medicine. Not at all.


Here is the entire recording I took of the veterans and their town hall sharing their experiences:

It frustrates me a great deal that Lieu wants to prop up veterans around himself to give the impression that he is patriotic, that he cares about this country and the constituents in his district. But the efforts are nothing compared to the wanton damage he wishes to inflict on this country and its political culture.

Shame on this leftist.

After the town hall, I spoke with one of the veterans, who appeared in an impress 3-piece suit. He was really unhappy with Lieu, and he confided to us that he didn't want to attend the town hall at first. Yet he chose to speak, and he spoke highly of our President Donald Trump! 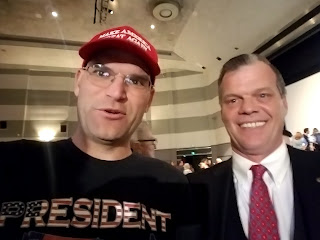 He even brought with him a piece of the Berlin Wall, since he was there when the German people rallied on both sides to tear it down.

After the event, we confronted some hostile left-wing elements who shouted at us and denounced President Trump, but we refused to be silent:


The leftwing natives were hostile, to say the least!

At least I had a chance to cross the stage and greet one of the other veterans! 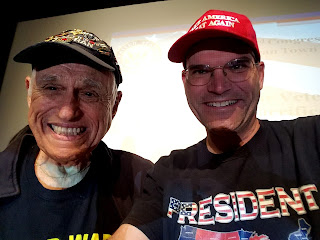 Check it out, everybody! I was on stage at the Wadsworth Theater!

As we walked about of the theater, we found more people looking to get in our faces, unhappy that we Trump supporters showed up and exercised our First Amendment Rights:

Then we went for the jugular against Lyin' Ted Lieu right outside of the theater.

These liberals were crazy!

Check out the video:

Here are some of the crazy people who tried to silence us:


This crazy lady kept trying to hug me and then push me away. I had to tell her to stop touching me!


But we were not afraid to represent! 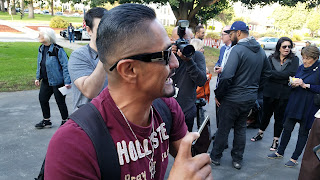 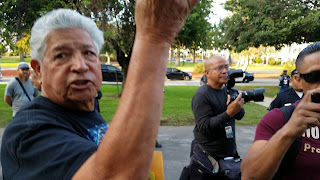 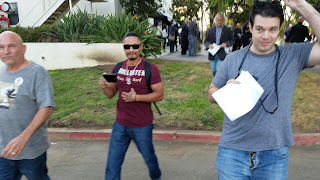 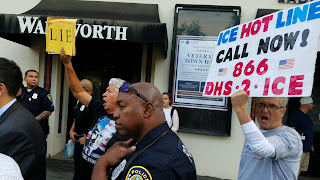 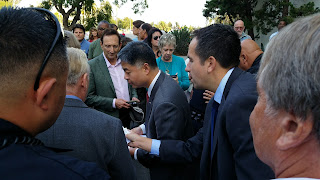 Then this crazy veteran got in our faces and cursed at us with abandon: 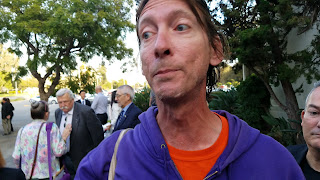 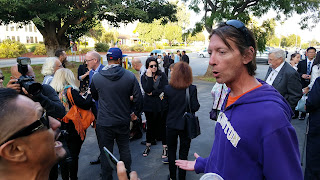 He said some disparaging things to Harim, too: "I feel sorry for you."

Why? Because Harim is Hispanic, and therefore he shouldn't be supporting the President.

Here's my video of that brief, racist exchange from the veteran:

The Daily Breeze published the following comment from one of the veterans, who was commenting about our protests against Congressman Lieu outside the theater:


After the town hall, tempers flared as a handful a supporters of President Donald Trump shouted at Lieu while he shook hands and posed for photos.

The sign-toting demonstrators called Lieu, a high-profile critic of the Trump administration, a liar and a fraud for about 15 minutes before the congressman was whisked back into the theater by police.

No arrests were made.

Veteran Richard Valdez was critical of the protest, but said the demonstrators had a right to voice their opinions.

“This was an event to recognize veterans and it should have stayed that way,” Valdez said. “Another time or place would have been more appropriate.”

Our answer was strong and emphatic: we had every right to protest because it's in our Constitution to affirm our values.

The veterans who fought overseas and in our country also fought for our rights to speak, to protest, and to hold our elected officials accountable, especially Lyin' Ted Lieu!

I knew going into this event that I had to make sure that all of us respected the service of our veterans. I am still outraged that there are laws on the books which prevent American citizens from demonstrating on federal property. That unconstitutional rule has to change.

Also, we affirmed many of the people there to see Lyin' Ted that we have every right to slam elected officials for doing a bad job. Lieu cares more about illegal aliens, LGBT perversities, Hollywood elites, leftist talking points, and attacking our President than actually representing the best interests of his district or upholding his oath of office.

I am so glad for LA County for Trump and members of We the People Rising, that they showed up to give honor to our veterans and to blast the corrupt, incompetent, and evil left-wing Congressman Ted Lieu!