What is the matter with some Republicans?

It is shameful, just plain incredible to me that Republicans in the South Bay and in other parts of California engage in shameless, divisive actions against their own party.

Political parties exist in part to support local and statewide candidates for office.

Do they not agree on principles? Do they not have any respect or regard for the work that political parties engage in to ensure better results for their state?


Yet what happens when the same candidate turns his back on the party?

Torrance Unified School Board member Don Lee, the same guy who lied about being the only officially endorsed Republican school board candidate for Election 2015, has now gone ahead and endorsed liberal Democratic--yes, Democrat--Al Murastuchi.

Yes, yes, I understand that the two were colleagues on the Torrance Unified School Board.

Still, David Hadley has done ten times the job that Muratsuchi had done when he had represented the South Bay. Instead of respecting the local interests and needs of the region, he followed the lead of the liberal special interests in Sacramento.

Democrats, Independents, and Republicans want a leader, not a follower, and this decision to continue supporting the same progressive left-wing candidate for the district is just terrible. 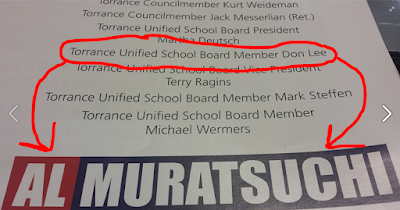 This is shameful, disgraceful, and just plain counterproductive.

What kind of a message does this send? What kind of leadership or governance does this demonstrate? For a guy who says "politics is fun," I do not see the fun or enjoyment in stabbing your party, your prized assemblyman, in the back.

Sources have informed me that Don Lee was liberal leaning as a school board member, anyway: "I like my city councils conservative, and my school board liberal."

He certainly fits in with this disappointing endorsement.

The South Bay has a Republican state assemblyman for the first time in 24 years, and what does Don Lee announce to the world?

Vote for the liberal Democrat and throw out David Hadley.

I have never been so disgusted.

Other conservatives in the South Bay have candidly told it like it is about Don:

Not only because Don Lee is a Republican, but also because Al Muratsuchi has run nothing but hateful, destructive, and abusive campaigns in the past, lying about his previous challengers in the most despicable fashion.

As a one-term FIRED Sacramento pol, he tried to pass legislation which would make it harder to fire pervert teachers. He also signed onto legislation to limit funding to local schools compared to other, lower-performing schools in the community.

How could anyone endorse Al Muratsuchi?!

Then again, perhaps we should not be surprised:

I understand that Republican unity is crucial, in spite of ideological, professional, or even personal differences.

But unity must be principled. Don Lee's actions have been anything but. It's time for accountability as well as unity.

This Republican, now RINO, should never have endorsed a Democrat, even when leaders of all parties have sided with a principled and pragmatic policy maker who has actually represented the 66th.