In California, pro-family groups and pro-life advocates are tired of the destructive agenda perpetrated by the regressive, bigoted Left.

From President Obama's abusive orders to destroy our borders, to his determination to eliminate the distinctions between male and female, the President and his Alinsky acolytes have sought to destroy the basic building blocks of family and society.

In California, more people are rising up against this destructive, arrogant tyranny.

I must admit, I had no idea what to prepare for with my first picket/protest in front of Target.

I had walked by that company for years, and used to purchase basic goods and supplies there.

I even have friends and neighbors who work at the store.

But we can no longer be silent.

When Target Corporation decided to open up their bathrooms and dressing rooms to every person based on their gender identity, as opposed to their biological sex, they went too far.

The rising number of cases of voyeurism, disruptions, and abuse are already proof and confirm that this misguided "transgender bathroom policy" is beyond destructive.

I reached out to as many leaders in the community as I could. I also contacted friends and fellow poltiical compatriots.

We have a good first-time showing for our demonstration in front of Target.

All it takes is one person to speak out and make a difference.

One protester shared that he was scared to demonstrate. At the end of the event, he told me that this effort built up his confidence. 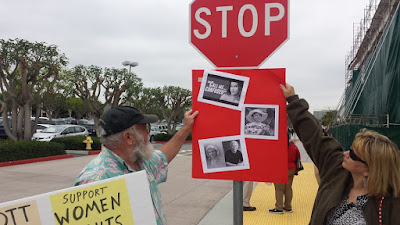 I arrived a few minutes before the beginning of our protest. One of the staff at the store saw my signs. Right away, he told me to leave.

I refused, telling him that the sidewalk and the front of the building is a public place, and I have a First Amendment right to protest.

More members of California MassResistance arrived a half hour later.

The Target manger arrived a few more times, and asked us to leave.

We told them that we refused to leave. We do not have to leave!

Some members of the public came up to us and asked why were boycotting Target. We informed them--and a number of other potential patrons--that Target enacted a new "inclusive" policy, which allows men to enter women's bathrooms, and vice versa. 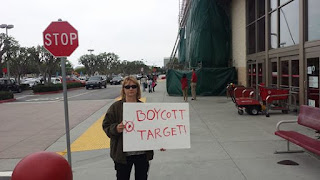 Transgenderism is destructive, dysfunctional, dangerous, and must be resisted.

California MassResistance is on the job!

A few people drove up to our group. One of them was a union worker building a new facade for the store. He agreed with our actions, but he did not know what else to do, since he works there.

Let us be very clear: California Mass Resistance does not want anyone to be out of work, If Target really cares about their employees as well as their customers, then they will reverse the terrible TransBathroom policy

A few more people approached us and after hearing about why we were protesting, they told us that the would never come back.

An hour into the protests, the Torrance Police arrived. Two officers arrived, including  Sergeant Ponegalek. He informed us that he is on our side, and wanted to serve as a liaison between CA MassResistance and the Target store. 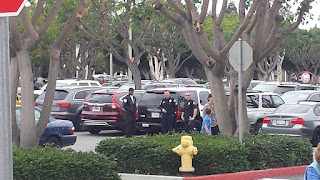 A few times, we noticed that the store managers would talk to the police, and clearly to us the police informed them that we have a right to stand and protest on public property against a corporation which ignores biology to violate the natural rights of American citizens.

One of the most interesting and intense moments occurred when two young women, bigoted and hateful, started criticizing, then arguing and cursing at us for protesting Target:

"Don't you have anything better to do?" one of them snidely retorted.

The other called the ladies in our group "pieces of sh--t", and said "I am more afraid of you than a man in a dress coming into my bathroom."

We recorded their insane litany of intolerance and disrespect.

One of the girls ripped the sign out of Wes Parker's hands. Robin Hvidston and I chased after the criminal hussy for her disgraceful behavior. They exposed their stupidity and hate all at once!

We informed the police about this criminal action. They can report what the bigoted little girls did, and we decided for the sake of time and focus not to press charges at this time.

Later on, the Target manager brought in private security to try and remove us, but we told him the same thing: we are not leaving, we have a right to be there, and we are going to protest. Check out this video.

Towards the end of our protest, one couple thanked us for our effort, and determined that they would never go to Target again until the corporation reversed the perverse transgender bathroom policy. Check out their comments here.

Throughout our two and a half our protest, members of the Beach Cities Republicans and We the People Rising arrived to make the first California MassResistance effort a resounding success.

Many people fear public protests and boycotts because of the backlash from store managers and even the police.

Notice that the store managers could not chase us away.

The police even supported our efforts to be there.

Yes, there were bad elements who tried to shame and berate us, and one of them stole Wes Parker's sign. Instead of getting angry or feeling powerless, we chased after her and recorded their  malfeasance on camera. 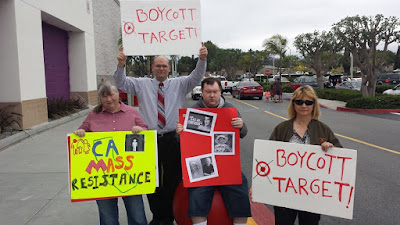 We have the power, and we have nothing to fear from the powers that seem to be. You can stand your ground, speak your mind, and make a difference!

Its time for California MassResistance! Join us!