Hands Off Our Beaches, Congressman Lieu!

The voters of the 33rd Congressional District shipped him off to Washington.

There, we could rest assured that he would never trouble us again, especially since as a member of the minority, he would be hard-pressed to pass ... anything.

In spite of the Democratic Party's small numbers, Lieu is trying to flex some legislative muscle.

Now he wants to turn the coastlines all around his district into a national park, and all the micromanaging which comes with such overreach:

More of the Big Green agenda crowding out the little guy.

Ted Lieu and regional environmental organizations are hopeful that H.R. 4871, which was recently introduced in Congress, will expand the federal Santa Monica National Recreation Area to include the Ballona Wetlands, San Pedro and the beach cities beaches, thereby providing more funding for environmental sustainability. The coastline as seen from the Palos Verdes Peninsula looking north. (Chuck Bennett / Staff Photographer)

We do not need environmental stability.

What we need is local control.

Please, go away, Ted Lieu! More residents in the Beach Cities need to throw sand on this stupid, dangerous idea.

Ted Lieu and regional environmental organizations are hopeful that H.R. 4871, which was recently introduced in Congress, will expand the federal Santa Monica National Recreation Area to include the Ballona Wetlands, San Pedro and the beach cities beaches, thereby providing more funding for environmental sustainability. The coastline as seen from the Palos Verdes Peninsula looking north. (Chuck Bennett / Staff Photographer)

Sustainability is code for Agenda 21, which will push individual property owners out of their homes, get rid of cars, and force people to comply with state and federal regulations, to their financial and moral harm.

I wonder how much long those beaches will welcome rising tides of visitors, if the cost of living floods residents out of the state.

The bill, introduced by South Bay Democratic Reps. Ted Lieu and Maxine Waters, would initiate a sweeping, yearslong scientific study of the potential effects on residents, wildlife, public trails and access to beaches and other recreational areas if the southern Los Angeles County coast is added to the Santa Monica Mountains National Recreation Area.

The Ballona Wetlands in Playa del Rey would be included, along with beaches from Santa Monica to San Pedro.

The legislation comes at a time of increasing strain on public resources.

Los Angeles County beach visits jumped 43.6 percent from 2007 to 2015, according to attendance figures from the county Fire Department’s lifeguard division. Attendance has climbed from roughly 50 million a year to more than 70 million in the past five years, stretching safety resources as lifeguard rescues increased nearly 30 percent from 2007 to 2015.

Local leaders can respond to those needs better than federal interloping. Back off!

“Whether it is conserving the Ballona Wetlands, preserving our beaches or creating more opportunities for recreation in our urban areas like Baldwin Hills and San Pedro, this bill is a first step toward making more federal resources available for our trails, beaches and open space,” Lieu said in a written statement.

Federal funding is not really federal. That money belongs to every wage earner trying to make a living in Santa Monica Bay.

“Expanding the Santa Monica National Recreation Area would make more scientific and infrastructure funds available, thereby addressing a shortage of resources to preserve open space for conservation and recreation in our community.”

There is no problem too small, which another law, ordinance, or regulation cannot fix.

Critics in Torrance argued that he would open up the local newspaper, then come up with a new law based on that boutique notion.

How many people are really worried about minors getting sun-burns in a tanning salon? Banning the private sale of puppies? Really? Are these measures really going to help wounded or neglected domestic animals?

All of this legislative micromanaging is about raking in the dough for the trial lawyers, and getting any easy headline for the Congressman.

The Daily Breeze gave Lieu another fat headline, this time about his attempt to place the entire Santa Monica Bay coastline under federal "protection":

The Santa Monica Mountains National Recreation Area, created in 1978, encompasses more than 150,000 acres of coastline from Pacific Palisades to Point Magu, and inland to the 101 Freeway. Lieu’s bill, HR 4871, was introduced to Congress in March and is being studied by the Subcommittee on Federal Lands.

A companion bill, touted by Democratic Rep. Adam Schiff, whose district includes Echo Park and Pasadena, also would extend the Santa Monica Mountains National Recreation Area eastward into the San Fernando Valley and Ventura County to encompass the Rim of the Valley Corridor out toward the Angeles National Forest. 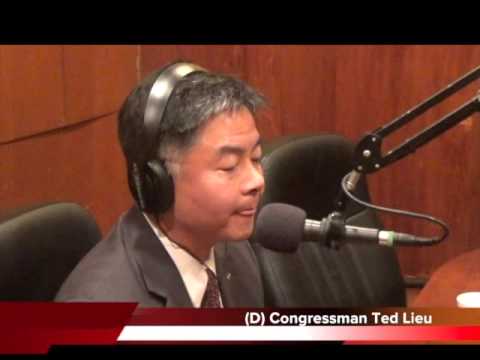 Why not turn the entire state of California into a national park? The progressive Left has wanted to push everyone out of the state, except for the uber-wealthy who can pay for the prohibitive taxes and regulations.

The specific effects of such a massive expansion of federal oversight aren’t clear, but the bill’s language focuses on expanding public space and residents’ access to it, while protecting the environment and natural ecosystems. Both bills have received broad support from environmental coalitions, but several regulatory agencies want to know more about how they could impact property holders, safety issues and regulatory mandates.

Big Green likes the legislation? Reason enough to kill it!

“The county has not taken a position on (HR 4871) yet,” said Carol Baker, a spokeswoman for Los Angeles County Beaches and Harbors. “We’ve been told that it would provide tools and resources without mandates and restrictions. But what they are, specifically, is not yet clear. It’s too early to say.”

As long as County officials strive to maintain a cozy relationship with their federal representative, they will never take a strong stance against anything. They want to make sure the big money rolls into their coffers from Washington as much as possible.

Tom Ford, executive director of the Santa Monica Bay preservation organization The Bay Foundation, cheered the legislation, saying it could create a more coordinated approach to protecting beaches and wetlands while also making them more accessible for visitors.

Make them accesible? They already are? People visit Redondo Beach all the time. They also swim along the shores of Hermosa and Manhattan Beach, or play volleyball.

The last thing that the South Bay needs is ... more federal government micromanaging!

“The hope would be that additional funding would come to expand preservation, ongoing scientific work and enable existing recreational uses to be enhanced and protected,” Ford said. “I’d love to really get a better understanding of how we are using our coast. This study is a chance for us to gain more wisdom and enhance our efforts.”

Please go away, feds! The beaches do not need bureaucrats!

Ford said there are gaping holes in existing scientific research on how ocean acidification and hypoxia from global warming trends are impacting Los Angeles waters. Researchers have documented that increasingly acidic waters caused shellfish to die in Oregon, but more studies are needed across the West Coast.

Meanwhile, urban planners are expecting sea-level rise to require elevated coastal buildings and structures because seas will likely go up from about 4 inches to 2 feet by 2050. Beach erosion, already a problem at Los Angeles County beaches, also will be a concern as well as flooding, experts said.

Sea level is going to rise! Oh no!

Has Congressman Lieu noticed the South Bay weather lately! It's been raining for the past week. May 2016 feels like February right now. The summer may be more mild than expected, too.

“We’re going to have to alter our beach activities or enhance them through sand dunes or hard engineering solutions like sea walls,” Ford said. “There are a lot of hard decisions that this study would support. Sea-level rise and ocean acidification are big issues.

Environmentalists ignore science and push a hollowed-out, religious agenda. What is there problem? Are they tripping on acid?


“It’s not going to get cooler as climate change progresses and people are going to keep coming to the beach.”

Let's be grateful that Congressman Lieu is in Congress right now.

He is freshman Democrat in the minority. He cannot get anything passed as long as Republicans maintain their majority.

Of course, California residents need to slam Congressman Lieu as hard as they can, ensure that he votes against bad legislation.

In the meantime, concerned residents who fear federal govenrment intrusion need to put the fire out on this guy!

Hands off our Beaches!