1. H 666, legislation that would repeal the obscenity exemption in state code, which unscrupulous school staff and library staff have used in order to push pornography and obscene material on children.

2. H 675, legislation that would ban the horrific practice of sexual mutilation of minors, chemical castration and surgical mutilation.

No library, no school should be pushing sexually explicit, perverse materials on children. There is no excuse for horrendously explicit materials like the pages in GenderQueer  or This Book is Gay to be available to children--or to anyone!--in public libraries or public schools.

And yet, there is one major roadblock to these bills getting passed into law in the state of Idaho:

Her name is Patti Anne Lodge. 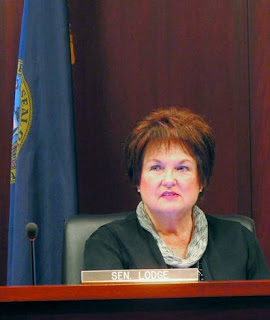 She is the state senator in charge of the State Senate State Affairs Committee.

She has been receiving all kinds of false emails and phone calls from "trans" parents throughout the state for the last two weeks. Most of these "parents" are not really parents, anyway, since LGBT activists have gotten very good at lying to legislators, giving the impression that they are trying to prevent their "trans-kids" from committing suicide.

Two weeks ago, Senator Lodge and her colleagues were ready to host hearings on H 675. Now, all of a sudden, she is getting cold feet? What's going on here?!

Why does Senator Lodge think that mutilation of a child counts as "health care"? Does she really think that hysterical parents getting swept up in social media social contagion have all the answers? And why is she ignoring the numerous testimonies of men and women who have left the whole "transition" cult? March 12th was De-Transition Day around the world. More men and women are coming out of "coming out," and it is time to listen to those voices.

Intellectuals, scholars, entire countries are discourage this horrific practice of "gender modification" of minors. Why is she ignoring the science, and the scientists? It's time for Senator Lodge to put the needs of children first!

She has also been receiving emails from corrupted librarians throughout the state, throughout the country, all of which are telling her not to grant a hearing on H 666.

Why does she think that sexually explicit material should be around children? If any adult were to take vulgar books like the ones mentioned above and show them to children on the sidewalk, they would get arrested. But for some sick reason, the same adult could showcase the same books in a public school or a public library, and nothing would happen to them!

Does this make sense? Shouldn't children, who are a captive audience in most public schools, and who expect some degree of safety in public libraries, be spared from such horrendous smut? It is not just the responsibility of parents to guide their children, but adults with a status of trust in the community must take the lead and keep perverse, damaging materials away from children.

The sad fact is that too many librarians right now have been indoctrinated with "free speech means anything goes" mentality, all of which comes from the krypto-marxist American Library Association. They are committed to pushing all kinds of filth on children, despite their pretenses to the public.

And right now, Senator Lodge is supporting these efforts. Why is Senator Lodge OK with obscenity in public libraries? Why does she think it is OK for library and school staff to push sexual perversion on kids? This is wrong! What kind of legacy is she hoping to leave for her family, for her community?

Contact Senator Lodge NOW and tell her to grant a hearing for H 666 and H 675. There is no excuse for her to be allowing the ongoing and abuse and destruction of children to take place in the Gem State. What kind of woman would want to leave such a horrific legacy for her tenure in Boise?!

Posted by Arthur Christopher Schaper at 9:44 AM