The worst I experience I had in Washington DC in the US Senate building occurred in my own US Senator's Office.

On Monday, September 18th, before departing in the afternoon back to Los Angeles, I resolved to visit as many US Senators' offices as I could, but I wanted to make sure that I confronted Kamala Harris and staff in her office.

Before I could get any points across, the staffers informed me that the whole building and all visitors and staff would have to go through a scheduled drill in case of emergency. Oh brother! Time was already short for me (I had about two hours before I needed to visit one more stop, then leave the DC area for Dulles Airport).

Before the drill commenced, I asked to speak with the legislative director.

One of the staffers told me point black that they do not release that information to the public. WHAT?!

Yes, I was barred from receiving basic contact information with the higher-level staffers in my own US Senator's office--the same US Senator who is paid with my tax dollars.

After the emergency drill, which went without a hitch, I visited every other US Senator on my list--along with a few others that I had not thought to go to.

Finally, before I rushed out of the Hart Building to get to my other destination, I visited Korrupt Kammy's office one more time. I spoke to a new staffer, an intern handling the phones. Right away I told them that I wanted to lodge a complaint against the office. In every other office, I told the staffer, I could get all the contact information I wanted to speak to every staffer, including the legislative director. The other US Senators provided me this pertinent information.

Why was Harris stonewalling me?!

Right away, the intern went into the back offices, and then returned with the contact information I had requested.

I outlined very clearly my concerns about illegal immigration. I showed her the picture of young Ruben Morfin on my shirt. They understood and registered my opposition to any kind of illegal immigration or amnesty coming out of Congress.

Let's hope that more people all over the country call their US Senators and make it very clear their opposition to amnesty, to keeping the DACA kids in the country, or any further delay on building the wall along our Southern border.

Of course, I got some photos in before I left! 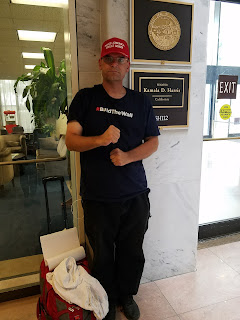 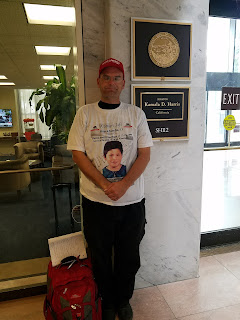 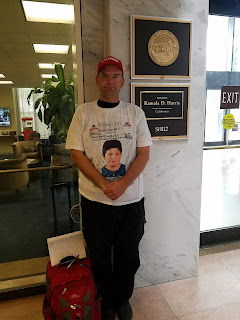 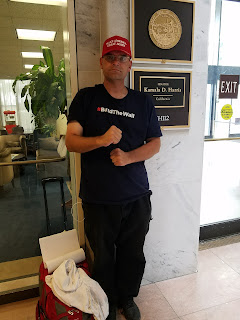