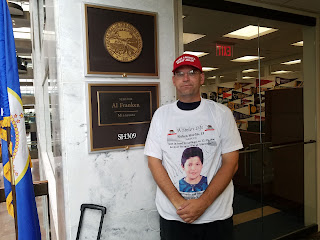 Yes, I went to US Senator Al Franken's office before leaving for Dulles Airport this past Monday.

I wanted to visit every US Senator's office I could in the Hart Building, since I was pretty sure I would only have time to go up and down those hallways. 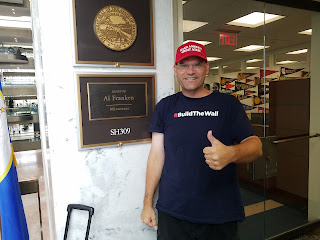 After visiting US Senator John Tester's office, I went across the hallway to Franken's office.

I had always wanted to go there so that I could say the following to the staffers:

"I'm good enough. I'm smart enough. And doggone it, people like me!"

When I announced this to the two staffers, they didn't seem amused.

They've probably heard that phrase so many times.

Then again, Franken has stopped being funny now that he's an insufferable liberal.

What's worse, he actually supports granting amnesty to all the "Dreamers."

Doggone it, no amnesty!
Posted by Arthur Christopher Schaper at 11:49 AM