I am a strong supporter of the RAISE Act, introduced by US Senators Tom Cotton (R-Arkansas) and David Perdue (R-Georgia). 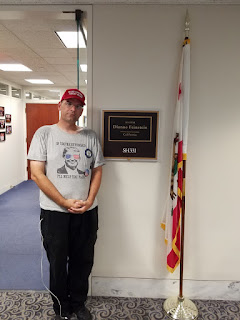 I contacted my US Senators' office on this key piece of legislation.

Here is the response that I received:

Thank you for writing to express your support for the “Reforming American Immigration for Strong Employment (RAISE) Act” (S.354).  I appreciate the time you took to write, and I welcome the opportunity to respond.

At least she takes some time to file a response to my requests and demands.

As you mentioned, on February 13, 2017, Senators Tom Cotton (R-AR) and David Perdue (R-GA) introduced the “RAISE Act,” which would eliminate the Diversity Visa program, restrict the number of refugees admitted annually, and limit the categories of family members that lawful permanent residents and U.S. citizens can petition to bring to the U.S.  The “RAISE Act” is currently pending consideration in the Senate Judiciary Committee, of which I am Ranking Member.

I want her to vote for it. Of course, following my discussion with the legislative consultant for Congressman Mark Meadows, I recognize that this legislation will not address the solution to the 11 million plus illegal aliens who still reside in the United States.

I firmly believe that comprehensive immigration reform is needed to improve our nation’s immigration system.  You may be interested to know that I voted for bipartisan comprehensive immigration reform legislation known as the “Border Security, Economic Opportunity, and Immigration Modernization Act” (S. 744), which the Senate passed by a vote of 68 to 32.  The bill provided solutions that would help fix our broken immigration system.  It took into consideration our country’s modern-day national security, economic, and labor needs, as well as our country’s age-old tradition of preserving family unity and promoting humanitarian policies.  It was fair and balanced legislation.  Unfortunately, S. 744 was not considered by the House of Representatives before the 113th Congress adjourned.

She always refers to this bill, the Obamacare of Immigration Reform bills, which passed the US Senate following the lackluster results of the 2012 Election and the misguided GOP autopsy from the RNC.

The fact is that the 2013 bill simply exposed how out of touch Washington DC, especially in the United States, had become! Thank goodness for all the Americans who hammered the House Conference and issued their damning opposition to any form of amnesty.

Please know that I remain committed to working on sensible solutions to address our nation’s broken immigration system.  I will be certain to keep your views in mind should the “RAISE Act” or similar legislation come before me for consideration.

Our immigration system is not broken, Senator Feinstein! The system would work just fine if enforcement and executive action proceeded apace without meandering and intermeddling from corrupt politicians more interested in votes than the values on which this country is based. 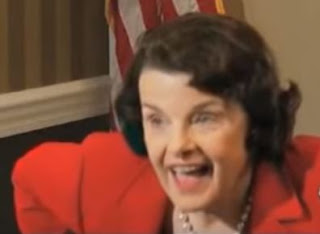 Dianne Feinstein is facing a firestorm on her left over a number of issues.

She will not get behind any kind of single-payer program.

She actually supported President Trump's decision to strike the Syrian airfield, too.

When she said that Trump can get better over time, the audience booed and shouted her down.

In other town halls, both in San Francisco as well as Los Angeles, she has been routinely heckled because she is not progressive enough.

One has to wonder if she really will run for re-election.

Her latest flap over attacking Catholic judicial nominees could hurt her chances--or help.

Either way, she needs to support Americans and stop the illegal alien invasion!
Posted by Arthur Christopher Schaper at 11:07 AM